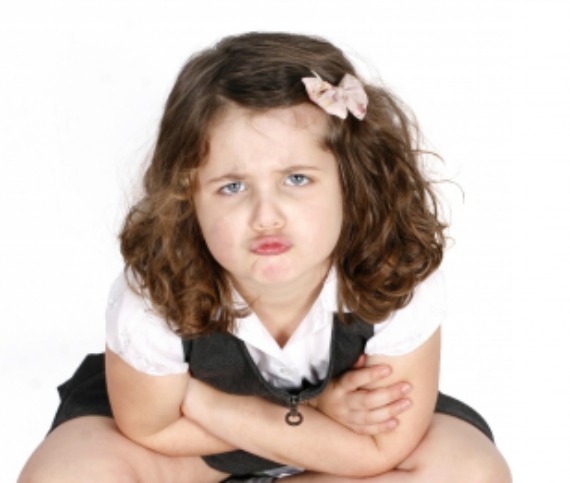 I’m Scared of My Kids

I recently read an article online called “5 Reasons Modern-Day Parenting Is in Crises, According to a British Nanny” because, as a modern-day parent, I immediately agreed with the title.

I do think parenting, and the day-to-day well-being of our children, is in crises.

My generation of parents is in many ways raising some of the rudest, most entitled children to ever walk the planet.  And when I’m in the presence of said children, I have to remind myself that it’s not their fault.

The parents are entirely to blame.

The nanny who wrote the article detailed five examples of the problems she has observed throughout the years, all of which I whole-heartedly agree with.  But it was her first point – “A fear of our children” – that has had me thinking for days.

Am I actually scared of my kids?

Well, I guess there have been times when I’ve fallen into the trap she explains –  like finally sitting down to dinner after everyone else has been served their meals only to have a toddler say she’s already consumed all of her milk and needs more.  Yes, I’ve immediately jumped up and refilled her glass.  And when I think about it, it is probably a little out of fear.  I didn’t want my child to suddenly start throwing a fit that I’d have to deal with, rather than quickly fixing the problem so I can eat my already lukewarm dinner.

But after I thought about it more, in the overall context of parenting, it’s actually not my kids I’m afraid of.  It’s everyone else and what they’ll think of me if my child throws a tantrum.  And so I’ve sometimes done everything I can to keep that from happening.

I know because it’s happened to me.

Right after my husband passed away, I was at Costco with my 6-year-old and my 2-year-old when my youngest decided to throw an epic tantrum over the fact that I wouldn’t allow her out of the cart.  I did my best to quietly discipline her and then I attempted to ignore her, just so I could make it out of the store.  Suddenly, another woman walked up to me and said, “Did you know you’re abusing your child?”

Now, I’m sure every parent reading this blog has been in a situation similar to mine where your child is out of control, you’re flustered, and you’re doing everything you can to just make it to your car.  And while I hadn’t laid a hand on my child, this woman proceeded to tell me that allowing her to scream like that was totally unacceptable and that I should have negotiated (yes, with my 2-year-old) and allowed her out of the cart.  She then asked for my name, informing me that she was going to turn me in to the authorities.

Of course, when I thought about it later I realized that the woman had no basis for turning me in for anything.  But that incident made an impact on me.  It scared me.  To this day, it terrifies me to raise my voice to my children in public or discipline them in any way where someone might hear or see.  I don’t think I’m an overly rigid parent, but I have had times (God help me) when I’ve argued with my pre-teen daughter and then noticed the window to her bedroom was open and for a moment I’ve wondered if someone is going to turn me in for…well…parenting.

So, while I’m not afraid of my children exactly…I am afraid of the world in which I’m raising them.

The nanny’s third point in her blog was that “we’ve lost the village.”  You bet your British bum we have.  Our generation of parenting is so focused on being the “perfect parent” that I think we’ve forgotten how to support other parents.  We’re concentrating so hard on doing our own personal thing and comparing ourselves to the parents surrounding us that we don’t offer the support we all need to raise polite, upstanding young people.

After all, it’s not just the kids who need the village.  It’s the parents, too.

It seems like we’re just not on the same parenting page anymore – you know, the one that says to the kids, “If you screw up, this is what the consequence is going to be.”  We can’t discipline other children when they come to our homes for fear of what that child might say to their parents and the backlash we might experience.  We can’t discipline in public because instead of someone walking up to us and saying, “Good job, Mom.  Way to create some boundaries” people are all too happy to smugly walk by and say, “Thank God my kid doesn’t act like that. And if they did, I’d handle it so much better.”

So, I guess the point is:  The British nanny is right.  I am a little afraid of my kids.

But once again, it’s not their fault.