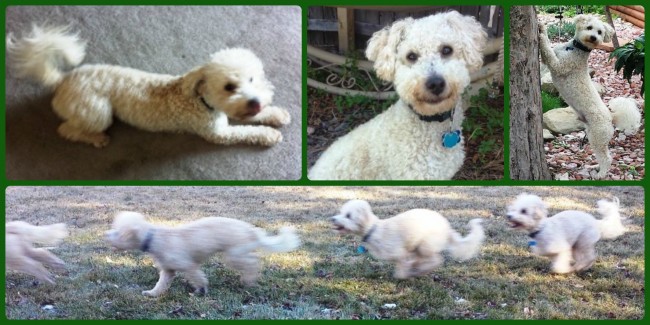 Do you know what a grass awn is?

Grass awn is another name for The Devil. Grass awns are Satans of the savannah, Lucifers of the llano and Mephistopheles of the meadow. Closer to home, they are Beelzebubs of the backyard. They may look benign, but they are EVIL. 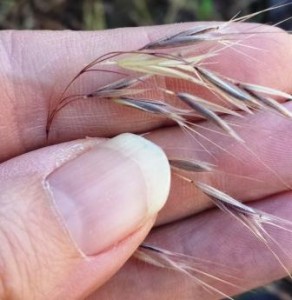 Just ask our dog, the happy-go-lucky Dexter. Truly, he’s the happiest dog in the history of dogs. People stop us on walking and hiking trails to tell us so. 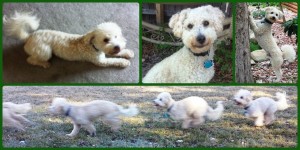 Dexter suddenly stopped being his happy-go-lucky self late one recent afternoon while I was cooking dinner. He entered the kitchen after playing outside with the kids and let out three uncharacteristic yelps, even though no one was around accidentally stepping on his tail or paws. He cranked his neck to look over one shoulder at his own hind-end and had a plaintive and pitiable look in his eye: Help me, Mom. He stayed that way with his neck cranked around toward his butt, panting heavily.

Our 13 year-old Tessa followed him in and became quite alarmed. We were on the same kitchen floor that she dissolved on the day I told her Grandma Lisa had died. In her mind, Dexter had cancer and was about to die, and she began to panic. I don’t know about “die” but by Dexter’s deflated and acutely pained demeanor, I knew it was dire. I breathed deeply and audibly to calm all of us down.

My hunch was that we were dealing with a wasp sting, so I looked for any signs of swelling on Dex’s left cheek and neck but saw nothing. I couldn’t imagine what else could have affected him so suddenly. Was it a pinched nerve or strained neck muscle? If so, is there such a thing as a canine chiropractor?

No answers magically appeared so I called the vet and was invite to come in for an after-hour$ vi$it. We gently got Dex into the car and I drove as unjarringly as I could. The tech asked us to leave him there until the vet was able to investigate. An hour later, we got the call that The Devil had invaded our dog’s ear canal and that we could take Dexter home for the night, as there was nothing they could do at that hour.

The treatment for the night was a painkiller and repeated ear irrigation. We were not to feed Dex breakfast the coming morning because we may be sedating him to get Beelzebub out. We paid for the goods and services and left.

The painkiller worked well — Dex showed no sign of pain the rest of the evening, though he did paw at his cheek a few times. We irrigated a few more times but did not see Lucifer exit the ear canal.

Dex was fine the next morning, unless you count hunger. We took him in for the vet to take a peek in a follow-up vi$it, and what she saw was….

Of course it was. The vet saw something — maybe a normal blob of fur, maybe the offending grass awn, but hard to tell with a wiggly dog. Sedation was the only way to know for sure.

We were faced with a dilemma: $200 for the sedation to remove the grass awn, or wait-and-see. Maybe with all the ear-washing, Mephistopheles had found its way out. Maybe Dex had shaken it out. Maybe we’d dodged a financial bullet. We left the vet again, betting on the latter, paying for that appointment (cha-ching!) without making another.

All was well until I did what nobody in a medical crisis should ever do: I googled “grass awn,” and boy, did I get an earful. From MeanSeeds.com, there are several ways that this brand of Evil can kill or maim a dog:

…As the florets mature, they fall off easily. They can be inhaled into the throat or lungs of a dog, swallowed, caught between the toes, become lodged in the fur, or fall into the ear canal. Once attached, the direction of the basal hairs creates a “barbed” effect which keeps the floret from backing out of the fur or tissue. As the animal moves the floret constantly migrates forward pushing the pointed base further into the tissue.

Once inside the tissue these florets have been known to migrate anywhere inside the body including through organs, down the spinal column, through the eyes, and up the limbs. Aside from the damage and infection caused by the migration, some florets carry bacteria that can cause serious infections depending on where they are located.

For more images of grass awn and their ill-effects, click here (some images are icky).

So there we were a few days later and many dollars shorter. We decided that despite the fact that Dex was showing no symptoms, we would go ahead with the sedation to verify that the grass awn is gone, and if it wasn’t, we’d have it removed. In the meantime, all four of us humans helped weed a long-neglected area of our yard — without complaint.

The decision was a good one. The vet found that the Evil Grass had perforated Dexter’s eardrum. She plucked out the offending diablo, leaving Dex to heal up.

For your canines and other pets this season, beware this small but mighty demon seed.

Had you ever heard of grass awns before?

When not ranting against Mother Nature’s lesser ideas, Lori Holden blogs from metro-Denver at LavenderLuz.com and can also be found on Twitter @LavLuz. Her book, The Open-Hearted Way to Open Adoption: Helping Your Child Grow Up Whole, written with Crystal, her daughter’s birth mom, is available through your favorite online bookseller and makes a thoughtful gift for the adoptive families in your life.