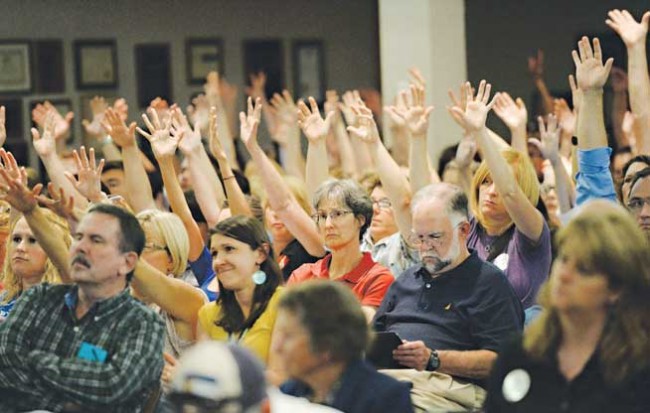 A badly divided Jefferson County Schools board on Tuesday night hired Daniel McMinimee as the next superintendent of the state’s second-largest school district, as audience members howled in protest and hurled catcalls toward the dais.

The 3-2 vote to hire McMinimee, who serves as an assistant superintendent with the Douglas County School District, was preceded by loud interruptions from a crowd of several hundred. At one point, a large portion of the room stood up and began chanting “stand up for kids” and a woman was led out of the room by security workers after she spoke out of turn.

Final terms of McMinimee’s contract — including how many years it will last, his annual pay and performance goals — need to be hammered out during the next few weeks.

Things got off to a bumpy start Tuesday evening, with board members Jill Fellman and Lesley Dahlkemper pleading with the majority — the three conservative members elected as a slate in November — to allow more than 45 minutes for public comment.

“We need to hear from our community before we vote,” Fellman said to loud applause.

But a motion to lengthen the public comment period failed on a 3-2 vote.

In a clear sign of which way sympathies lay with much of the crowd, CLICK TO KEEP READING