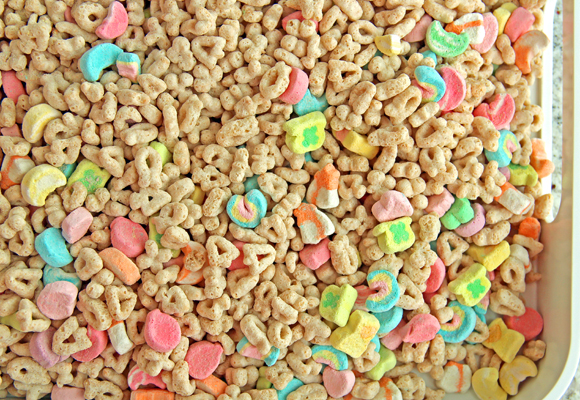 Motherhood: Sometimes Not Very Lucky and Not at all Charming

The scene: My littlest two boys are in bed for midday naps. Fuzzles, the ten month old, is secure in his crib while Scooby, the two year old, is in his room— hopefully asleep, but if not, at least he’s trapped: his door doesn’t have a lock, but it’s very tricky and in three weeks here he hasn’t yet been able to open it. The other two kids (Bubba, 4, and Princess Fluffy, 5) are outside playing on the park with some friends.

And I, well, I need a break. I see this moment of solitude as the perfect time to fill a hot bath and indulge for a few minutes— recharge the ol’ batteries, doncha know. A rare pleasure indeed.

And so, I immerse myself into the delicious water and close my eyes. Ahhhhh. After a minute, I hear some strange noises. I open my eyes to find Scooby (who not only got out of his bedroom but also apparently climbed up the pantry shelf) lording an open box of Lucky Charms over my bathtub. Before I scream, “NOOOOOOOOOOOOOOOOOOOOO” he turns the box over and the bathtub is suddenly full of Lucky Charms.

“Oh my gosh, how am I going to clean this up?” I say out loud. Scooby has an idea. He begins scooping the cereal out of the water and ravenously eats it. “Ewww! Ick! No, no!” I squeal.

I busy myself with trying to get the cereal out and keeping Scooby from snarfing it all down when I hear yet more noises. I turn to see Princess Fluffy and all of the neighbor children STARING at me. Me. Naked. In the bathtub. With all of my bits exposed. And let’s not forget the Lucky Charms floaties. (And now I’m just certain that their parents are going to sue me for the therapy that will now be necessary.) At this point I begin shrieking, “GET OUT!!! GET OUT!!!! GET OUT!!!!” And eventually, they catch on, and leave. Clever little things.

That’ll show me for trying to take a break. Mommy never EVER gets a break. I should know that by now….

Brillig speaks four languages, has lived on four continents, and had four children in four and a half years.