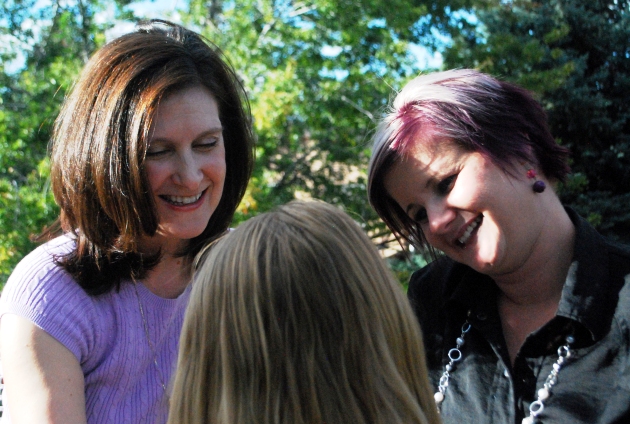 One spring day 13 years ago, Crystal was about to leave the hospital after giving birth the day before. We’d recently met through the adoption agency we’d both consulted, and we’d suddenly bonded when she went into labor two days prior. She spent the morning teaching me how to change a teeny-tiny diaper as her 4-year-old son looked on. I was full of excitement and self-doubt. Tessa, this precious newborn, was clearly Crystal’s baby.

(with her permission and blessing, of course).

Two years later, on another spring day, Michele placed her baby boy, whom she was not in a position to care for at that time, into my arms during an entrustment ceremony in the conference room of the adoption agency we’d both consulted. His tuft of fine, blonde hair, the same color as hers, emphasized the fact that Reed was hers. Would forever be.

Those early days of gaining my footing in the mom arena were a challenge. I felt like an imposter. In the moments when I was overwhelmed by the new responsibilities of motherhood, first to one child and then to two, I wondered if there had been a giant mistake. What divine entity thought it was a good idea for me to raise somebody else’s children? (Oddly, it must have been the same divine entity that I bowed to in gratitude on a daily basis.)

But, in listening to others living in adoption — birth parents, adult adoptees, other adoptive parents and tuned-in adoption professionals — I was able to make a profound shift, which I’ve documented at LavenderLuz.com.

You might expect that eventually I came to know that I had replaced their first mothers as “Mom.” And you would be partly right.

I did move fully into the role of mom. Developing a 20-deep repertoire of lullabies and singing each one every night will do that to you, as will changing countless diapers, becoming a spatterground for all sorts of body fluids, and later, being both the tooth-brushing and homework-doing enforcer. Tessa, now 13, and Reed, now 11, are most definitely mine. I fully claim them and they fully claim me.

But there was no replacing. As Crystal and I share in our book, The Open-Hearted Way to Open Adoption: Helping Your Child Grow Up Whole, instead of operating from that either/or mindset, we shifted to a both/and heartset. Crystal claims Tessa and Tessa claims Crystal. Reed’s birth father claims Reed and Reed claims him. My children are claimed by and able to claim both their clans — those by biology and those by biography. Not just by their birth parents, but also by their birth siblings, birth grandparents and birth aunts and uncles. Alongside my own mom and dad, you are likely to see my children’s birth family members cheering from the sideline at Tessa or Reed’s sports activities or school events. You might call us a hyper-extended family.

So yes, I am raising somebody else’s children.

And that’s OK, because at the same time, I am also raising children who are my own.

Lori Holden blogs from metro-Denver at LavenderLuz.com and can also be found on Twitter @LavLuz. Her book, The Open-Hearted Way to Open Adoption: Helping Your Child Grow Up Whole, written with Crystal, her daughter’s birth mom, is available through your favorite online bookseller and makes a thoughtful Mother’s Day gift.