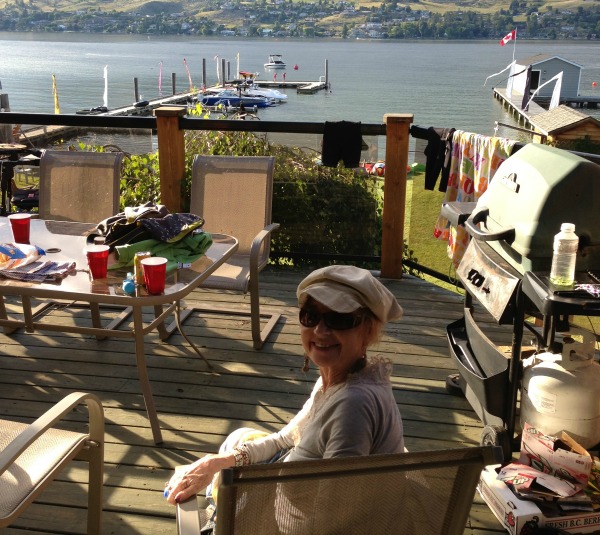 My mom’s necessity of creation: What a body ravaged by MS has taught me

A couple of years ago, there was a large fire at my parent’s house that destroyed years of memories and decorations but was also motivated us to action. They have lived in their home for almost 45 years. Between my mom’s crafting career, the closure of her beloved tea room and gift shop, inheriting mementos of loved ones who have passed and her love to shop, the house is literally busting at the seams.

The closets in every room are jam-packed with treasures, many of which haven’t been opened. My mom’s craft area/laundry room/storage room were the worst culprits and were literally floor-to-ceiling with boxes upon boxes of beautiful ribbons, outdated lace and flowers, sequins, fabric, glue guns, dishes, baskets, unfinished wreaths and over 50 straw hats.

Growing up, my mom WAS Martha Stewart. Everything she touched was gold and she was (and still is) beautiful. She could cook anything and craft everything. She was the life of every party and the mom many of my teen-aged friends loved to visit because she provided them with the laughter and  stability they craved as their own families were rocked by divorce.

As my mom’s Multiple Sclerosis has worsened over the last 25 years, she has spent less and less time in her craft room. Now, navigating the stairs by herself is a herculean task so she rarely goes into the basement. Her craft table had become a dumping ground and was literally piled three feet high when I visited after the fire. I resolved to help my dad put a dent into the seemingly insurmountable clean-up. We had to tread lightly because Mom was still reeling from the losses sustained from the fire but also knew there was no better time.

It took my dad and me several hours to remove the hundreds of hanging dried flowers and wreathes. We purchased several storage bins but it was a painfully slow process and I was filled with frustration at the ostensible pile of outdated “junk” in front of me.

Late one night after I put my two kids to bed, I resolved I would start small and put all her ribbons into one bin. My then-7-year-old daughter Hadley approached me, asking if she could help. I hesitated but followed a prompting that this was something we should do together. We worked side-by-side into the night. After organizing the ribbon, I decided the craft table was the one area I had to finish and so we delved into all the thimbles and threads and needles and paints, neatly placing them in bins.

A transformation happened as that craft table started to appear underneath the clutter–not just with the table but with me. Hadley would grab many of the items I was ready to dump and marvel at their beauty, of the time it must have taken Grandma to make them. Soon, instead of lamenting the many stains on that table, I saw a Picasso of my mother’s art take shape. I could remember the many late nights she spent down here creating–it was her breath of life and what made her truly exceptional.

My disdain for the process turned to love and respect for a gift I have never had, nor appreciated.

I then looked at my little girl who is more like my mom than anyone on this earth. Her creativity, her spark, her spunk and even that stubborn streak that is sometimes so extreme it can be detrimental to her own health. All of it, she shares with her Grandma Christine.

It was a humbling, sweet moment as I caught a very powerful glimpse of the loss my mom is sustaining. Real life has no filters. Sometimes it’s raw, hard and messy and I finally understood what it was like for her to suffer so deeply–and for so long–as her body slowly betrays her.

But I also saw how she has prematurely given up on the joy she once had that is still obtainable in a different way. She can no longer create masterpieces but she can still inspire her little artists. I know Hadley will be the first in line to sit in her workshop to learn her art.

From now until Mother’s Day, Mile High Mamas will be featuring essays dedicated to your favorite mom memories.