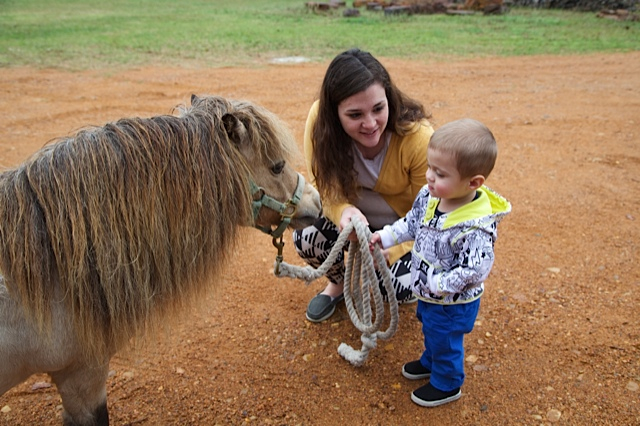 Introducing your toddler to animals can be scary for them and for you.  My toddler loves animals but that scares me because if I turn my head for a second he might end up petting a dog who is a little scared of him.

We had the chance to take him to a friend’s house who has all kinds of animals, including chickens and a miniature horse. My toddler was in heaven! But I trusted him a bit too much and started chatting.  Off he went to see the miniature horse again who had his back turned toward my little guy.  My friend saw what was happening before he even reached the horse but the thought of danger hadn’t even crossed my mind.

I started asking around about child and pet safety when it comes to introducing toddlers to animals.

Here’s what I learned:

When my child was still crawling we visited my parents who have a small dog.  I placed him on the floor to crawl around and he crawled straight for the dog who really had no idea what was going on.  Luckily my mom knew of her dogs uneasiness and was able to put the dog in a chair or outside where it felt more comfortable.  This could have been a bad situation for both my son and for the dog.  Had my son been attacked he might not have the same love for animals that he does.  If the dog felt attacked by a crawling child she might feel aggressive toward other crawling kids.

Now both my son and my mom’s dog have a great relationship.  By that I mean we keep him from pestering her and he feeds her from his high chair.

What are your tips for introducing small kids to animals?