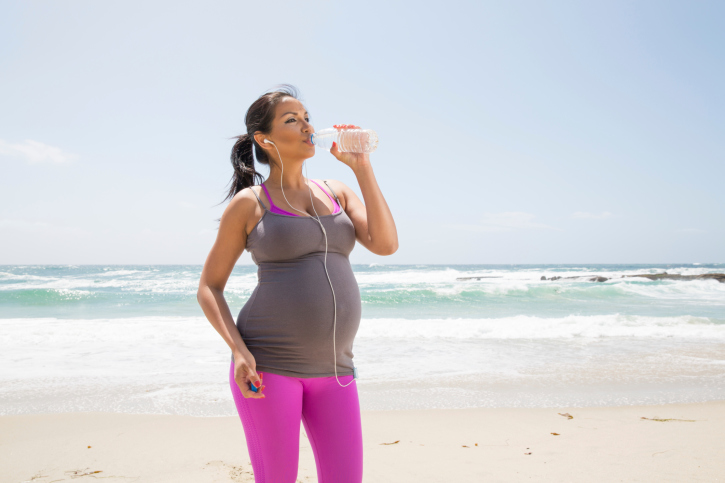 Exercise During Pregnancy: How Much is too Much?

Q. I am a pretty fit person (I run, I do Pilates, etc.) but in all of my pregnancies I have toned down my workouts while pregnant, in large part because running just isn’t comfortable.

But, I’ve noticed a lot of pregnant women continuing very rigorous exercise (boot-camp-style classes) throughout most of their pregnancy. What is the general thinking on this? Is it safe to continue with a high-intensity workout, or should women be toning it down? Is the risk to the unborn child or to the body of the woman carrying the child?

Q. I’m hoping that in one of your future blogs you can address the topic of exercise. What is forbidden and what isn’t? How much exercise is too much?

I ask this because I am an avid runner. When I was pregnant with my first child, I continued to run up until my third trimester. Granted, my distances weren’t so great, and I was getting slower each time I ran, but still I continued. My doctor approved of my exercise. I ended up giving birth to a healthy baby boy. I would even go as far to say that maintaining an exercise routine during my pregnancy lessened the pain of labor and childbirth.

That being said, I got sooooo many dirty looks on my runs!

A. I can’t say I relate to Clara and Jennifer — I spent my pregnancy mostly focused on whether I really HAD to walk on the treadmill for 30 minutes a day or could instead just vegetate in front of reality TV. But I did look into the issue of intense exercise, just in case I had a sudden burst of energy. (I never did.)

The concern about exercise comes, at least in large part, from a few studies that show that women who do a lot of physical labor at their jobs have more pregnancy complications (preterm birth, for example) than women who don’t. One example is a study that shows that women who stand for more than six hours a day at their job are about 1.25 times as likely to have a preterm delivery as those who do not. The issue with this study is that women who have jobs that require them to stand a lot also tend to be different in other ways (less educated, for example), which also relate to preterm birth.

Better is to look at studies of exercise that are randomized, meaning that half of the women in the study are randomly selected for exercise encouragement. Studies like this generally consider what happens when you encourage women to do 30 or so minutes of aerobic exercise three to five times a week — basically, about what we are all trying to fit in.

The findings suggest that there is little impact: no change in preterm birth rates, gestational age, frequency of cesarean sections, or fetal growth. There is no evidence of a difference in baby Apgar scores or in the length of labor. The studies also don’t find any negative impacts on the mom.

This suggests that if you’re engaging in 30 minutes of standard aerobic exercise in pregnancy, that’s fine to continue. However, there is some evidence that exercising really hard during pregnancy could (very temporarily, during the period of exercise) compromise blood flow to the baby. In one study of six Olympic-level athletes, researchers found that when women exercised so hard that they pushed their heart rate to more than 90 percent of their maximum heart rate, there was a decrease in the fetal heart rate below what is considered normal. This was temporary — when the women stopped the exercise the heart rate returned to normal. However, there is a concern that repeated fetal distress — if exercise like this occurs every day during a pregnancy — could have negative consequences.

So how to know when you are exercising too hard? Your maximum heart rate is around 220 minus your age. If you’re pregnant at 30, this is 190 beats per minute. The evidence from elite athletes therefore suggests you should stay under 90 percent of that, or about 170 beats per minute. If you think you may be coming close to this, by all means get a heart monitor and try it on a few runs. If you find you’re not coming close, you can start leaving it at home.