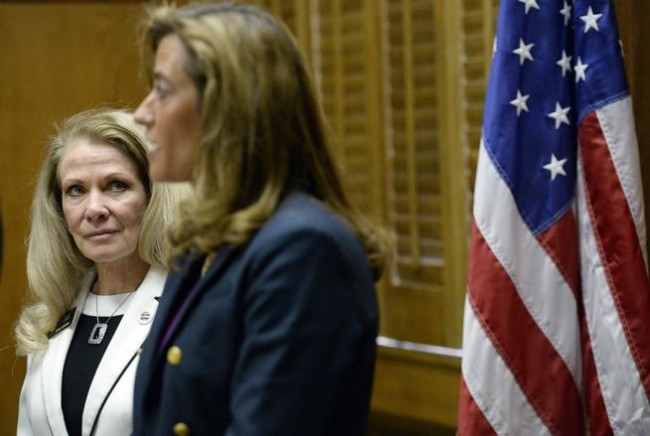 n January, a group of moms delivered apple pies at the Capitol when they lobbied lawmakers to delay education testing standards.

The next month it was moms, a number pushing strollers, who opposed a bill allowing teachers and school staffers to carry concealed weapons.

In the last week of February, a group of moms stood by and watched as Gov. John Hickenlooper touted tough air quality rules that had just been adopted.

If there’s a theme of the 2014 Colorado General Assembly, surely it’s moms.

Cheri Kiesecker of Fort Collins, who had previously visited the Capitol only to chaperone a class of students, showed up this year to lobby on behalf of a bill that delayed statewide tests for Common Core, the widely adopted national math and language arts standards. She was one of the moms who brought pies.

“We are not politicians. We don’t know how this all works,” she said. “The pies started off as a suggestion, like mom and apple pie, and we decided, ‘Why not bake them pies? Maybe if they saw we really are moms, they would take us seriously.’ ”

Mothers in politics is nothing new — the group that became Mothers Against Drunk Driving was formed in 1980.

But Chris Arend, spokesman for Conservation Colorado, said he “absolutely” sees the mom message being used this year more than in the past.

“I think both sides see the value of this, not just issue-wise but politically, too,” he said. “Politicians really see the importance of Mom, as they should. Moms have a huge role in our society. They’re our caretakers, right?”

They’re also voters, who can determine the outcome in a close election. That’s what happened in 2010 when Republican Ken Buck narrowly lost to Democrat Michael Bennet in a U.S. Senate contest the GOP thought it would win.

Newsweek in 1996 ran a cover story on soccer moms, an emerging group of sought-after voters. Other national outlets also used the term, noting it was first coined by Denver City Council candidate Susan Casey when she ran for office the year before. “A soccer mom for City Council,” was her slogan.

“Mine wasn’t about identifying a constituency or a swing vote,” Casey said then. “I was just trying to introduce myself to people.”

Political consultant Eric Sondermann of Denver, when asked in 1996 about the new term, described soccer moms as mostly suburban women who felt pulled between career and family demands.

“And unlike the Angry White Male, these are people who are not leery of government,” he said, at the time.

The mom theme is still popular both in politics and pop culture, Sondermann said in a recent interview. He pointed to the Winter Olympics and its popular Procter & Gamble’s ads. “Proud sponsor of Moms” was the message of the spots that focused on the athletes and their mothers.

” I think it’s to soften their message so it’s not the harsh edge that has become equated with conservatives,” he said.

At the Capitol, Sen. Vicki Marble of Fort Collins called her bill to delay tests for Common Core the “Colorado Moms Bill.” Although she’s a conservative Republican, she had bipartisan support for her measure.

“On this issue, moms don’t care about party,” Marble said. “They care about fixing the problem.”

Senate Bill 136 died on a party-line vote in the Senate Education Committee, where Kiesecker, a Democrat, was present.

“I guess that was my naive mom perspective.”

On another mom front, the Colorado chapter of Moms Demand Action for Gun Sense this year has celebrated the defeat of several GOP firearms measures, including a bill that would have authorized school employees to carry concealed guns in elementary and secondary schools.

Members held what they called a “stroller jam,” with moms, dads and grandparents lining the halls of the Capitol with strollers filled with children.

“This was a couple of days before Valentine’s Day, and the kids had all made valentines for legislators that read ‘Books, not guns,’ things like that,” said Jennifer Hope, leader of the Colorado chapter of Moms Demand Action for Gun Sense.

The group was in its infancy stages last year when hundreds of anti-gun control activists descended on the Capitol to protest new gun laws under consideration. Among them: Linda Elliott, the state coordinator of Moms Against Gun Control.

“There is this stigma that women shouldn’t have guns. They should leave it up to the men,” Elliott said. “But God gave me two kids and I believe it’s my job as a mom to protect them.”

Hope said membership in Moms Demand Action for Gun Sense has soared since last year, and the group has had a presence this year at the Capitol.

“We get information about these bills when we need moms’ help,” she said.

Another group, Colorado Moms Know Best, was at the Capitol last month when Hickenlooper praised rules adopted by the Air Quality Control Commission, a citizen board that he appoints. With the new rules, the governor said, Colorado will be tougher on air pollution from the oil and gas industry than any other state.

Oil and gas and environmental groups worked on the rules.

Colorado Moms Knows Best formed last fall amid fears pollution rules would be weakened, said Jaimie Travis, who is referred to in news releases as the “head mom” for the group. At that time, members delivered to the governor’s office 18 “gas patch kids” — Cabbage Patch dolls that represented kids impacted by oil and gas development.

“The bottom line is that moms were counting on Gov. Hickenlooper to protect the health of our kids,” Travis said. “As the governor said, it’s not 100 percent what everybody wanted, but it’s the best and strongest air quality rules in the country,

“We felt we moms really made a serious impact. It’s something to be proud of.”