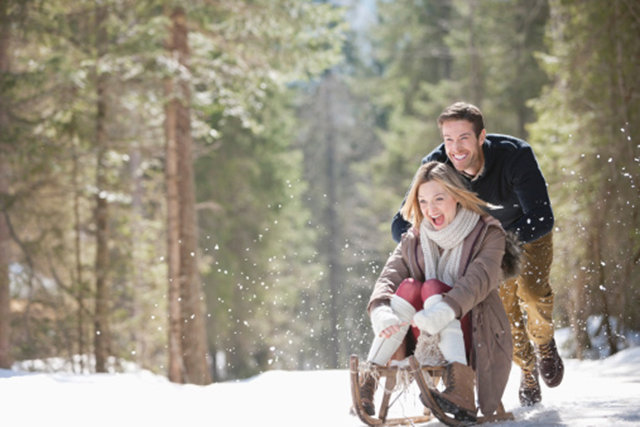 Winter is here. But don’t be glum about the short days and cold winds. There’s so much to celebrate, from big coats to bonfires.

1 The drama of saying ‘Winter is here.’ Say it out loud now. It feels good, doesn’t it? It makes you feel powerful and prophetic. Now try saying it about the other seasons. “Spring is coming.” You sound like Kate Humble. “Autumn is coming.” A weird conker fetishist. “Summer is coming.” Boots advert. But “Winter is coming” is sexy. It’s full of drama and foreboding. You’re predicting death, essentially. You sound deep. And Game Of Thrones has only enhanced this. Now you’re not just declaring that you know the order of the seasons, you’re alluding to the fact that you watch good drama. You’re telling people you can differentiate between a dizzying number of identically named characters. This means you’re cleverer than them. Remember that.

2 Being able to see sunrises. A few weeks ago the only people who saw the sun rise were bakers, night workers and the chronically sleep-deprived. In the dead of winter, the sun doesn’t rise until at least seven. Everyone sensible’s awake by then, and the first thing they see is a gorgeous pastel explosion: a sky-sized swirl of reds, pinks and yellows that makes them awed to the point of tears to be living on such an impossibly beautiful planet. Then they Instagram it, and it may as well be someone’s dinner or a cat’s face. Seriously, people are idiots.

3 Carbohydrates are a viable diet option again. The tyranny of summer eating is over. No longer must we force ourselves along to barbecues and picnics to swat wasps and check bits of chicken for blood. Now we get to eat like civilised people: by munching on lumps of meat and potato in a hot brown sauce indoors, while covered in a duvet, drinking red wine and watching The One Show. We can eat hot pies, not cold Ginsters pasties bought from a 24-hour garage because we didn’t have time to prepare anything for a picnic. We’re allowed to eat hibernation food, gorging on carbs to the point of catatonia, until we become so filled with self-loathing that we buy the first celebrity fitness DVD we see in January, and leave it unopened because we can’t believe we’ve sunk so low.

4 Winter is not summer. It isn’t summer, when you can’t hide your wobbly belly under a big coat. Summer, when men wear socks with sandals or begin marauding topless so everyone can see the badly spelled prison tattoo tribute to their ex. Heatstroke. Discomfort. Summer is the worst. Now, the air is getting crisper. It becomes impossible to breathe amid pints of vaporised commuter sweat on trains. There are log fires. There are ruddy-faced shopkeepers welcoming you with a hearty chuckle. There are hog roasts on every corner. There are probably lots of things I haven’t just ripped off from Dickens. Either way, we can all stop pretending to like summer for another nine months. What a relief.

6 Bonfire night. I’m talking about bonfire night here, not firework night. Firework night is abysmal. It’s not even a night any more, as far as I can tell. The first fireworks of the year are set off at about 3pm on the first Thursday of October and continue intermittently until the middle of January. And they’re rubbish. Fireworks are try-hard and samey. They get boring after about three minutes. To my knowledge, nobody has ever witnessed a full firework display without entertaining the thought of self-immolation. But bonfire night is the bee’s knees. It has a romance that fireworks can’t replicate. Holding a foil-wrapped jacket potato in the mistaken belief that it will ever be cool enough for you to eat. Seeing how close you can edge to the fire without being so overwhelmed by heat and smoke that you pass out. Becoming so hypnotised by the dancing flames lapping at the cold, autumnal sky that you convince yourself you’re an obscure pagan god-figure. Trying to eat chips with gloves on.

7 Films stop being about exploding skyscrapers. Summer is when Hollywood tries to make everyone so nauseous from motion sickness that they’re able to normalise widespread murder. Take this year’s Man Of Steel: a classic summer movie, in that hundreds of thousands of people die, but we were all too busy whooping at a flying superhero to pay attention. But now it’s getting cold, films start to be about people again. People from this planet, who barely ever have pitched battles with armies of exploding robots on abandoned oil rigs. Admittedly it’s also awards season, so the people I’m referring to are actors and what they’re doing tends to be overblown emoting. This all culminates in the Oscars, a 20-hour parade of self-importance and false sincerity, where performers try to convince us that acting is a form of social justice and not just something they did to kiss girls.

8 That bit between Christmas and New Year. Christmas is fine, if being uncomfortably full and trying to make polite conversation with your semi-estranged family is your thing. And New Year, too, if you enjoy overpriced clubs full of whooping idiots. But the real lure of the festive season is the bit between Christmas and New Year. Festive perineum, as I wish it was called. Time slows to a crawl and days lose all meaning. Your entire life becomes one of exquisite boredom. It’s a time for watching that box set you never got round to. For never getting properly dressed. For eating nothing but cold meat and Quality Street. For feeling superhumanly smug about not being a nurse, or a shop worker, or one of those bargain-obsessed lunatics who queue outside Next in the freezing rain at 3am on Boxing Day. It’s like a sick day where you’re not drowning in mucus. It’s what being kept in a Matrix-style amniotic battery pod would be like if the robots had been thoughtful enough to provide onesies and Matchmakers. It’s the greatest leveller in the land. I’m already excited.

9 Pop-up calendar shops. I’m bewildered as to why pop-ups are so trendy. Queueing for three hours to eat an overpriced burger in a dilapidated shed (even though there’s a McDonald’s right there) isn’t new or revelatory. Calendar shops have been doing this for years. Calendar shops invented the pop-up, and it’s time they got the recognition they deserve. They dictate the thing you’ll spend an entire year looking at. Football players? Airbrushed drawings of cars? The woman who came fourth in Celebrity Big Brother? It’s all there. I’m looking at a picture of Jason Statham right now. Would I be if a pop-up calendar shop hadn’t caught my eye last December? Perhaps, but maybe not this specific picture.

10 The first snow of the new year. When I was a school teacher, lessons would come screeching to a halt when it snowed. “SNOW!” the kids would scream. They’d smoosh their grinning faces against the windows to take in the wonder. This, it turns out, is something everyone does. Magistrates, funeral directors, brain surgeons, members of Cobra; at the first glimpse of snow, they’ll all yelp with delight and mash their faces against the nearest window.

When the first snowflake hits the ground, everything transforms. Trains seize up. Schools close. Everybody gets a day off, even if they work from home. The naysayers might whine that snow never stops anything in Canada, but that’s because they’re genetically opposed to fun. For the rest of us, the first snow of the year – and the chaos it creates – is perfect. (Please note that this applies only to the very first snowfall of the new year, and for a maximum of 24 hours. Once it turns to slush and freezes into a rock-hard grey slab of death, or gets deep enough to go over your shoes and make your socks wet, or stops me from doing anything I want to do, I’m done with the wonder.)