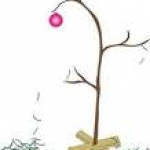 Dealing with Holiday Grief: How One Widow Learned to Appreciate Christmas

My mother’s finger slipped underneath the flap, separating the tape from the red and green paper. She looked at me and gave me a small smile as I watched her slowly unwrap the gift, my father looking over her shoulder, quietly waiting for her to open the box and reveal its contents.

“It’s of the trip we took to the mountains this summer,” I said, trying to keep my voice from shaking, as they both looked through the photo album. “The one right before the accident.”

And then I fled to my room.

I sat on the edge of my bed, rocking back and forth, hot tears streaming down my face. Get it together, I thought. You have to get it together. They need you down there.

While I could hear the sounds of my three children playing with the new gifts they had just received, I didn’t hear the usual laughter that accompanied the photos that I gave my parents every year. Usually we all howled over baby Sarah and whatever costume we had forced her into during Halloween the year before. Or looked in amazement at how much Haley had grown. Marveled over how much Michael looked just like his dad, round face and all.

And smiled at the family picture that always ended the collection.

But that year, I couldn’t stand to watch them look at all of the pictures – knowing that those would be the last they would ever receive of all five of us.

Up until that point, I had jollied us along pretty well. I mean, with three kids under six years of age, I didn’t really have much choice. Kids still need to be fed, changed, and dropped off at pre-school. Christmas presents still need to be purchased, the house still needs to be decorated, and Santa still has to come.

But my usual holiday joy was gone. It was impossible for me to feel the magic of the season as I always had, knowing that Brad would never again be there to enjoy it with us – something I still found too horrific to believe.

Six years later, when I look back on that Christmas, I still wonder how I got through it – and the five Christmases since. Knowing that I’ve forever lost the man who was my Santa Claus my entire adult life is, at times, too hard to take in. There are times when I sit around the Christmas tree with my kids and I’m still stunned that this is our life. And there are times when I still expect Brad to walk in the door, cheeks red from the Colorado cold, stomping the snow off his feet, opening his arms wide enough to hold three children in a hug.

Because they were so young when my husband died (five, three, and one years old), my kids don’t feel the effect of his absence during the holidays as acutely as I do. Our life, as it is, is their normal. They don’t know that it’s just been in the last couple of years that my smile has been genuine and not forced. They don’t know what a struggle it has been to make sure that their holidays are as magical as mine were when I was young, before I was changed by loss. They don’t know how hard I’ve searched for my Christmas spirit – only to find it buried in the sands of time that has become my healer.

There were years that I wallowed. I just couldn’t help it. I wanted that man back and, stubbornly, I refused to believe that he wouldn’t be. It wasn’t until the fog of grief had lifted a little that I realized if I wanted to find the joy in Christmas again, the joy in life again…it would be now up to me to create it.

And so I changed. I had to. I changed the way the house looked, choosing lights I knew my husband would have hated, but that I’d always wanted to put up. I started a new tradition with the kids where we would go to one special show or event every season, something we had never done before with my husband. And I stopped looking at the door and waiting for someone who will never come, choosing instead to pay attention to the people right in front of me.

Loss has taken some of the selfishness out of the holidays for me. I believe that I’ve always thought of others, but, if I can be honest, I thought about myself a lot, too – what I was getting, what I wanted. Now, the holidays are completely different. My focus has shifted. It’s no longer about the gifts, but about the memories I’m creating. Even simple things like making cookies with the kids and watching my kitchen explode into a doughy, floury mess has new meaning for me. Because loss has taught me that it’s not the things that I remember and treasure.

I would be lying to you if I said the holidays are easy now. Sure, they’re easier, but they will never be easy. I’ve always said that I sometimes miss the woman I was before, the one who lived her life not knowing what true loss is. Because that changes you – there’s no way around that.

And I can look at my children, dressed up for a play downtown or sitting down to dinner in a messy, cookie-filled kitchen and think…

Join Catherine Tidd at the Tattered Cover in Highlands Ranch for the official release of her book “Confessions of a Mediocre Widow” on January 7, 2014! Find more of her writing at www.CatherineTidd.com and learn more about her social networking website for anyone who has lost a significant other at www.theWiddahood.com.