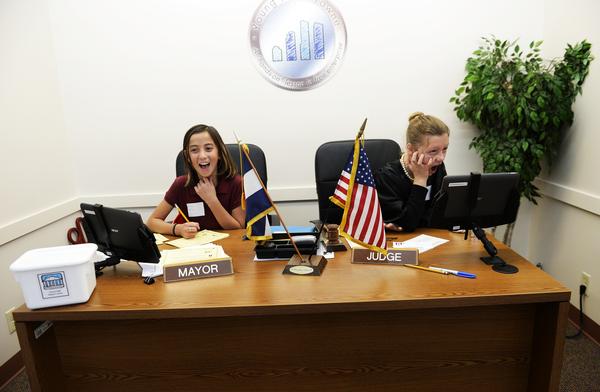 School districts in Colorado have long had the discretion to include personal-finance topics in their curriculum, but many didn’t or only gave them minimal attention.

The shortcomings of the state’s decentralized approach became painfully evident last decade, when Colorado led the nation in foreclosure activity for several months in 2006.

Not only did families suffer, but so did many school districts, which saw their budgets shrink along with property values and tax revenues.

As part of a larger overhaul of educational standards, the Colorado legislature in 2008 mandated that personal-finance lessons be woven into the curriculum at every grade level, making the state among a handful to do so.

Implementing those new requirements has taken several years, but this is the school year when all the new standards must be in place, said Melissa Colsman, executive director of teaching and learning standards at the Colorado Department of Education.

Larger school districts have developed their own lesson plans, and the department is helping out about 100 smaller districts lacking that expertise, Colsman said.

And there has been no shortage of private-sector and nonprofit groups, many belonging to an umbrella group called the JumpStart Coalition, offering help with lesson plans and materials.

At AmeriTowne in Cherry Creek on  a recentThursday, 120 fifth-graders were running around, getting a taste of grown-up life, complete with jobs, paychecks and money to spend.

“I thought it sounded cool, and I have enjoyed it,” said Jay Cory, a fifth-grader from Steck Elementary in Denver — and, for the day, a police officer in the faux town run by the Young Americans Center for Financial Education.

Cory said he gets an allowance at home but doesn’t talk much about money with his parents, although he has learned not to spend every penny and to donate at church.

“You save some, and you spend some,” he said.

Sometimes, the lessons at AmeriTowne hit a little too close to home.

At the town’s medical center, a student belts out to another in a doctor’s outfit to be sure to collect the co-pay before treating a patient.

“Smarter and more financially literate customers are better for our community, and they are better consumers of financial services,” said Mark Goldman, a spokesman for TCF Bank in Minnesota.

A TCF-sponsored survey found that 90 percent of high school students said they weren’t learning what they needed to about personal finance and 49 percent felt clueless on the topic.

“Life is the best teacher, but it would be nice if they were a little more prepared so life is not so hard on them,” said Julie Skrzypek, a teacher at the Denver Center for International Studies.

Skrzypek is using a program that TCF is sponsoring in the state. It’s called EverFi, on online educational platform used in about 6,000 high schools nationally.

TCF has challenged EverFi to reach 2 million high schoolers in its eight-state region, including Colorado, with its personal finance program, Goldman said.

“It is a difficult topic for schools and school districts to scale in a meaningful way,” said Ray Martinez, a co-founder of EverFi, which started five years ago as a way to teach life skills to teenagers and adults.

EverFi, which is cloud-based, takes finance lessons into a virtual world that teenagers are comfortable with, making it more likely they will engage and retain what they learn, Martinez said.

Skrzypek said the program grades students as they go along and handles other administrative tasks, freeing up more of her time to work with students one-on-one when they struggle with a topic.

While it has upgraded with changing technology, Young Americans is sticking to an approach that has worked for it over the past two decades — face-to-face interactions among students that can’t be programmed, said the nonprofit’s president and CEO, Richard Martinez Jr.

Corporate sponsors help foot some of the bill in return for getting to associate with one of the town’s storefronts or the program in general.

Those sponsorships have reduced the cost to participate to $20 a student, which includes a 30-hour curriculum that culminates with a day at AmeriTowne.

On Thursday, State Farm covered that cost for students of Boston Elementary in Aurora.

Personal-finance lessons are typically incorporated under social-studies content and in mathematics, where problems gain a real-life applicability. Some schools teach personal finance as a separate course.

Colsman said one of the biggest complaints she heard as a math teacher was from students asking how a concept or assignment applied to real life. There are few topics more practical than money.

At the very least, Martinez at Young Americans said financial-literacy education will make children more appreciative of the burdens their parents face to keep the lights on and food on the table.

“Now I know why Mom and Dad come home tired,” Martinez recounted hearing from one student who went through the program.