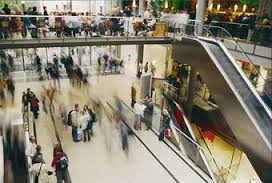 I’ve had more than a few minor parenting fails so far:  I’ve put a diaper on backwards. I’ve stuck his foot in his own waste. I’ve poured milk into bottles with no bottoms, twice.  I’ve set our sleep training schedule back a few times because of either my need to hold him RIGHT NOW, or because I am not watching the clock. I’ve accidentally scratched him.  He peed on our kitchen knives! All of them!  I’ve gotten frustrated, I’ve gotten stressed, I’ve fallen asleep when I shouldn’t have.

Still these fails are minor at best. Right? Minor until recently when I had a major parenting fail.  See, I went to Park Meadows Mall. PARK MEADOWS FREAKING MALL.  In my mind, I saw the mall as a peaceful sanctuary of elegant piano music, shiny floors and fun lights for my three month old son to stare in wonder at.

It was so crowded we literally took the last parking space, which was approximately eight miles from the entrance.  I had dragged my son down to the south end of town already, and he hates being in the car. (mistake #1).  I had not given him adequate time to relax.(mistake #2). I had thought that the mall would be fun (mistake #3).

Navigating the food court was madness with a stroller.  A scary looking stranger reached for my baby and said “Oh, he’s a big fat boy.”  I physically stepped in front of her and said “We don’t let strangers hold our child. Thanks for understanding.” My words were nice. My tone was not.  She waved her hands in the air like I was crazy and then stalked away to clean out the Falafel place.  That really shook me up, along with the realization that it would be SO EASY to steal a baby in a mall.

Then I had the escalator incident. I learned that escalators with strollers are a bad idea, even if you’ve found a way to hold the stroller so that it works fine and you did it like seven times already and it was great and then that one time the wheel doesn’t quite make it over the border and you have to wrench the stroller sideways to get it over and in the meantime, your friend is behind you on the escalator and so are 1,000 other people and you just freak out and cry and feel unworthy of the beautiful child in your possession.

Note to self: Elevators ONLY from now on.

Then it was time to feed the baby in a sea of people and sounds and loud music pumping out from the Abercrombie and I just had this realization that I am, at the moment, a sad, train-wreck Mom who has crazy hair and bad shoes and pushing a stroller and just can’t take anymore.Every time I looked at him, all I could think was “this child should be at home, somewhere calm, not in a car, not in a mall, WHAT ARE YOU DOING TO HIM?”The truth was, he was fine. He didn’t cry at the mall.  Only Mom wanted to cry at the mall. It was all too much: the poor baby, the noise, the stroller, the weird lady, the escalator, the shoes, the youths. I felt like I was selfish for dragging my child out, selfish for going to the mall, selfish for packing him a car seat just so I can visit people I want to see, selfish for waiting in line for a pretzel when he’s fussy, just selfish all around. FAIL.
Parents, I’m DYING to know: what is your major parenting fail?
Guest blogger Colleen Oakes is the author of the Elly in Bloom series and the upcoming YA series Queen of Hearts. A die-hard Colorado native who really enjoys living in other places, she attended Concordia College in Bronxville, NY where she received her BA in Creative Writing. She lives with her husband and son in North Denver and blogs frequently over at The Ranunculus Adventures.