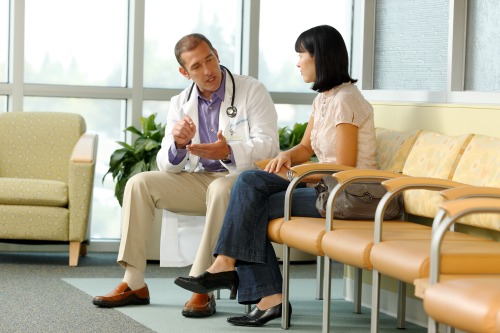 Gynecologic Cancer Awareness Month: What Every Woman Needs to Know

September is Gynecologic Cancer Awareness month.  It seems like an odd thing to name a month after, but since many gynecologic cancers go unrecognized in their early more treatable stages, this is an opportunity to raise awareness of what the five main types of gynecologic cancer are and what you need to know about them.

Before we start, do you know the five gynecologic cancers?  Think of all your girl parts: uterus, ovaries, cervix, vagina, and vulva.  Those are the five.

Do you know which one is most common?   It’s uterine cancer. We hear a lot about pap smears but this most common cancer is actually not diagnosed on a pap smear.

So let’s talk about that one first.  Uterine cancer is also called endometrial cancer.  The endometrium is the lining of the uterus.  The uterine lining grows in response to one of our female hormones, estrogen.  Too much estrogen and you are at risk for cancer of the endometrium. People who are overweight tend to make too much estrogen. Estrogen is produced in adipose (fat) cells and so if someone is overweight, they are at increased risk for cancer of the uterus.  Put something else on the list of “good reasons to maintain a healthy weight!”  The main symptom for this type of cancer is irregular vaginal bleeding, so if your periods seem completely out of whack or you are menopausal and have vaginal bleeding, let your doctor know because that is something you want to get checked out.

Now let’s talk about cervical cancer.  This used to be the most common gynecologic cancer but with pap smears now we can diagnose and treat pre-cancerous cells before they even become dangerous.  You may have heard that now that we can check for Human Papilloma Virus (HPV) on a pap smear, you only need to get a pap smear every three to five years. The HPV virus causes the vast majority of cervical cancers and it takes a long time for the virus to work its evil on the cervix.

So, if you test negative for the virus and your pap smear doesn’t show any abnormal cells, you are safe for a while. Many women are relieved to know they no longer need an annual exam. However, it may seem like if you only need a pap smear every five years, why bother at all?  Well, a pap smear every five years in a low risk woman is enough to make sure you do not have HPV and do not have any abnormal cells brewing, so DO NOT skip this test!  Have you read “The Immortal Life of Henrietta Lacks”? That poor woman died in her early 30’s of cervical cancer leaving five children behind who then suffered terribly without their mother’s protection.  Enough said.  Actually, one more thing: smoking increases the risk of cervical cancer.  So don’t smoke.  That’s something else to put on the “good reasons to stop smoking” list.

Ovarian cancer probably gets the most media attention.  Remember Gilda Radner? In this country a woman has about a 1 in 70 lifetime risk of getting ovarian cancer. There are no good screening tests and the symptoms of this cancer are vague and can be attributed to a myriad of benign causes.  Doesn’t sound too good, does it?

The symptoms are pain, pelvic/abdominal pressure, bloating, fullness, etc.  My goodness, I had all those symptoms last week after eating some bad fruit!  BUT, the symptoms went away and that’s the key.  If you notice these symptoms and they persist after a couple of weeks, call your doctor.  Unfortunately, it is difficult to diagnose ovarian cancer at an early, treatable stage, but the sooner it can be found, the better.  So the best way to deal with ovarian cancer is to be aware of your body and know when you are not feeling quite right.

Now let’s talk about vulvar cancer. If you feel a lump or bump “down there,” let your doctor know especially if it bleeds to the touch.  A lump on the vulva is often an ingrown hair that is infected or some other kind of benign process but just like with the other cancers, if you have vulvar cancer, the sooner it can be found and treated the better.  Many vulvar cancers like cervical are caused by HPV but melanoma and other types of skin cancers can also be found on the vulva.  Sometimes when women feel odd lumps or bumps down there they are embarrassed, or maybe even in denial that something could be wrong, but put those feelings aside!  Come in to get checked and treated because it could save your life!

Lastly, there’s vaginal cancer which is really quite rare. Similar to the other gynecologic cancers, vaginal cancer has vague symptoms, like bleeding or pain, so again, let your provider know about any unusual symptoms you are having.

Gynecologic doctors and care providers love to go over all this stuff with their patients, so ask them your questions! Don’t ignore any new, strange symptoms you have and let’s not be silent about gynecologic cancers. We women need to stay alive and well!

Guest blogger Joyce Gottesfeld, MD has been an Obstetrician/Gynecologist with Kaiser Permanente Colorado for the past 17 years. She’s a mother of three young daughters, ages 15, 12 and 8 and married to Marshall Gottesfeld, also an OBGYN in Denver. Joyce loves caring for women and started this blog as a way to share thoughts on women’s health, being a parent, a wife, staying fit and other life topics. To read more of her blog check out http://bit.ly/DrJoyceBlog