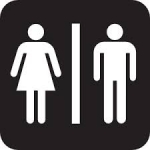 Are Bathrooms Really the Right Place for Advanced Technology?

I think that just about every mother has gone through this scenario in a public restroom with her child at some point.

The look of uncertainty on the child’s face that shifts into terror.  Little hands clutching the thighs of her yoga pants.  And the slow wail:  “I don’t wanna sit down!”

I have three kids and I’ve experienced this moment with each and every one of them.  And I feel for them, I really do.  Because “back in the day”…bathrooms were simple.  Toilets flushed when you pushed the handle down.  Sinks came on when you operated the faucet manually.  And paper towel dispensers were pretty straightforward.

But thanks to the wonders of technology…those days are long gone.

I know I find going to the bathroom confusing, so I can’t even imagine how bewildered my kids must feel.  I’m okay at home.  Home, I can handle.  It’s when I go out in public…that’s when trouble starts.

So, there you have it – I’m a thirty-seven year old woman who worries that every time she goes to the bathroom, she won’t know how to do it right.

Actually, I guess age has nothing to do with it because I’ve seen women of all ages in the restroom, looking bewildered and frustrated and wondering how all of this is supposed to work.  In fact just the other day, I was standing in the restroom at Red Robin, waiting for my youngest daughter to come out of the stall and watched as a woman around my age stood in front of the faucet and waited impatiently for the water to come on.  And I finally decided to throw her a bone.

“Uh.  You have to use the handle to turn that on.”

She looked mortified and then began to laugh as she turned on the water the “old fashioned way” by actually twisting a fixture to make the water flow.  And then she turned cautiously toward the paper towel dispenser and I knew she was thinking, “Now how does this thing work?”

I’m a big fan of technology.  Love it.  I want to hug my DVR every night after I put the kids to bed and I can watch the television shows I’ve saved up all week in uninterrupted silence.  I have about two apps on my iPhone because I can’t really figure it out, but I really enjoy being able to get my weather when I want it and reading my Facebook newsfeed as I sit in the carpool lane.  Technology is awesome.  But I’m starting to think that it has its place.

And it’s not in the bathroom.

The thing is…it’s not standard everywhere you go.  Not every bathroom has the same set-up.  When I walk in, I have to silently evaluate everything so that I don’t look like a complete fool.

Just last week, I was completely mystified by the automatic trash can that I encountered, while out and about, that opened when it sensed motion.  And while I can sometimes see what the inventors intended (how great is it that I don’t even have to get my hands near a dirty trash can to get rid of the paper towel I just spent five minutes trying to get?), I wonder how useful all of this is in the long run.  Because, frankly, I’ve seen more than a few cheap bottles of hand soap sitting next to the automatic soap dispenser that probably worked for the first week it was installed and the owners decided it just wasn’t worth the $200 to get it fixed and ran out to Walgreens for some old-fashioned Dial.

It still amazes me that my children will use public restrooms at all because when they were little,  they all went through a phase when they were absolutely terrified to use the toilet.  There they would sit, just doing their business, knowing that one little move would send the automatic toilet into a flush with so much suction, I’m surprised I didn’t lose one of them in the mall plumbing.

Of course, there is the other side of that – the five minute wait for it to flush so that you won’t be one of “those people” who leave their toilet unattended.

I can’t tell you how much time I’ve wasted, standing in front of sinks, waving my hands around like a germy mime, only to have the water turn on just as I’ve given up and started to move to another one.  Then I’ll rush back to the original sink, hoping to just catch enough to rinse my hands off, only to have it stop flowing the second my hands aim for the water.

I know this is supposed to be helping our water consumption, but frankly I just don’t see it.

And then there’s the dance.  You know…the one that we have to do to get something to dry our hands off.  We wave in front of that little red light.  Nothing.  We start moving our entire upper body.  Nope.  Then in desperation, we start doing the tango until one little square pops out and we end up drying our hands on our pants anyway.

Again, I know that this whole automated system is supposed to help the environment.  And I’m all for that kind of stuff.  But the truth is, I’m dehydrated because I’m scared that too much liquid will force me into a bathroom I don’t understand.  I feel old, thinking about the time I’ve wasted waiting for something to flush, run, or pop out.  And I’m worried that we’re raising a generation of children that, should they come upon some sort of bathroom fixture with a handle, they won’t know what to do.

Oh, well.  I guess they can always Google it.  Gotta love technology.