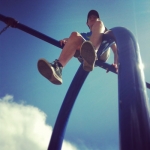 A Parent’s Guide to Playground Games

This summer, we spent many mornings touring playgrounds all over the metro area. It’s challenging to find playgrounds that are fun for all my kids, so they often play classic playground games to make the experience more fun. The best part about playground games is it’s a great way to meet other kids. I find it odd and miraculous no matter where we’ve been, kids seem to know the same games. There aren’t lengthy explanations of the rules. One kid will shout, “Who wants to play Groundies?” and before you can scamper up the big slide, kids are introducing themselves to each other.

Often, I’d sit on my bench and watch them tear around and wonder what they were doing. After consulting with kids, I’ve developed a guide for other parents so they too can know the rules of Groundies, the nuances of Infection, the joys of clogging the toilet.

Groundies: To play Groundies, you need a minimum of three people, a maximum of about a million. Mostly, according to my nine-year-old, you want to make sure everyone can fit on the play equipment. The group decides one person to be It. The rest climb up on the play equipment. The person who is It counts to ten while everyone gets into place. She can keep her eyes open while on the ground. Once she reaches ten, she has to find the other kids. If she climbs up onto the play equipment, she must close her eyes while she searches for a kid to tag. The kids must be quiet so she won’t find them. If she comes near, they might move off the play equipment. If they touch the ground, she can yell “Groundies!” which makes the ground-toucher automatically It. If she tags someone while on the equipment, they become It. Obvious dangers of this game include running around on playground equipment with one’s eyes closed. I suspect a bit of cheating occurs because it it didn’t, our family would probably have a fleet of wheelchairs and a wing named after us at the local hospital.

Infection: Infection is a variation of tag, like Groundies. My kids liken Infection to a zombie apocalypse. The person who is It runs around chasing the other kids. Once tagged, a kid is now infected and must join It’s mission to hunt down the other kids. Eventually, everyone is tagged because more and more kids become infected. The last kid standing is the big winner. I asked my kids about fakers—those who were tagged, but act like they weren’t until BAM, they touch another kid and declare they actually were infected. This happens, they admitted with disdain. There’s an honor code. Don’t we wish all infections had an honor code? Streptococcus A would nod at my kids and pass right on by. Been there, done that.

Ultra Tag: Everyone is It. Everyone. Once a kid is tagged, he must sit down and keep his eye on the person who tagged him. Once that kid is tagged, he can get up again. There’s no winner—the game rages on for an entire recess or until kids drop from exhaustion. If two kids tag each other at the same time, conflict is resolved by rock, paper, scissors. Loser sits.

Monarchy: This tag game works best with very large groups. Three kids are Kings or Queens or Kings and Queens, and maybe, if they have platform tennies, they can be Prince. The three kings run around independently. They are in competition. Each kid a king tags follows that king. The object is to be the king or queen or Prince with the most subjects. Some kids claim the subjects can be loyal to the king and help him tag. Others say the subjects are merely there to inflate numbers.

Toilet Tag: This delightful game is a variation of freeze tag. In regular freeze tag, the kid tagged must freeze in the position he was in when touched. If a friend comes along and touches him, he is unfrozen. With Toilet Tag, the kid freezes with one hand up on the side of her head, held like a toilet flusher and crouching in a seated position. She must stay in that position, frozen, until a pal comes along and flushes the toilet. Whether or not sound effects are involved is strictly up to the child.

Clog The Toilet: I’m sensing a developing theme. This isn’t really a game. It’s more of a way to annoy and worry mothers and hurt each other. Equipment needed: A tube-style slide. Who plays: A group of kids. Object: To reenact that time your little brother flushed a stuffed flamingo down the toilet. One kid slides down and stops at the bottom of the slide. The next kid slides down, then the next, the next, the next, all while the first kid holds everyone inside. Soon, there’s a clog and someone screams and moms yell. The first kid gets out, then another. It’s like a clown car, with more and more and more kids emerging from the slide all sweaty and angry with dirty shoe prints on the backs of their t-shirts. Good times!

I’d love to hear about more playground games. What do your kids play?