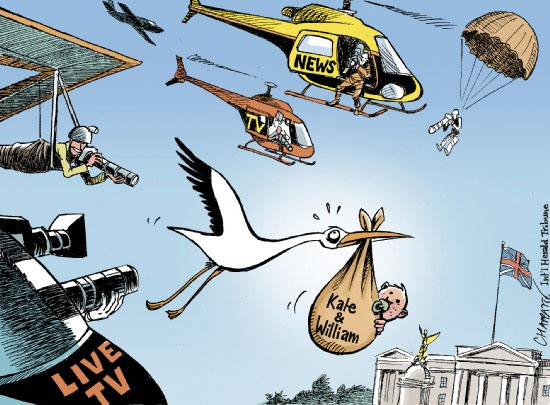 Real vs. Royal: A Tale of Two Births

While I’m not much of a follower of the royal family, you’d have to be living under a rock to not know that they finally popped that baby out last week (I can hear the collective sigh from people around the United States who are still wondering why in the world we care so much).  But since every detail of the royal birth has been shoved under our noses for the last nine months, I can’t help but think about the differences between a royal baby birth and what happens when a regular kid comes into this world.

And, in my opinion, regular beats royal any day.

First there was the build-up.  Poor Kate was followed everywhere she went and her ever-adorable baby bump was carefully measured by the eyes of the world.  Her weight and wardrobe were constantly scrutinized and her days in the hospital with severe morning sickness headlined the national news even in the US.

This may come as a shock to you, but my experience was completely different.  I’m not entirely sure, but I think the only people who really cared about the fact that my husband and I had decided to procreate were my parents.  It didn’t really bother anyone else that I couldn’t eat anything but yogurt for the first three months of my pregnancy.  And if someone had tried to make me give up my yoga pants so that I could squeeze into a Burberry coat and heels…I probably would have cried at them.

US Weekly published an article the week before the royal birth, detailing everything that would happen when it was time for that regal head to appear.  They said that “as soon as Kate feels that first contraction, she alerts her private secretary who rings Kate’s doctor on his palace-issued mobile phone.”

When I felt my first contraction, I tried to wake my slumbering husband who was dead asleep, thanks to the large amount of beer he had consumed during the Air Force/CSU football game that day.  I believe he took more pain medication than I did after the birth, thanks to his pounding hangover.

In England, one hundred and eighty journalists camped out in front of the hospital so they could have a prime baby-viewing spot and the delivery room had been sanitized since July 1st.  The official family photographer was banned from drinking as his presence would be required immediately after the birth.

My dad waited a week after each one of my children was born before making the trip from out of state to see them, ensuring that he would not

have to witness anything resembling the messy part of the actual birth.  And while I’m sure the room was properly sanitized, that did not keep my family from sitting there and gulping down large quantities of Good Times while they waited for me to get the show on the road.  I don’t think the photographer at Sears had been drinking before he took my kid’s picture six months later when I finally emerged from my house, but I can’t be entirely sure.

US Weekly also reported that a sterling silver commemorative penny from the Royal Mint would be given to all of the children born in the UK on the heir’s birthday.

Yeah.  My husband I didn’t have that.  The Mint told us that their penny maker was broken that day.

In the case of William and Kate, royal aides raced to notify the heads of the 54 Commonwealth countries and a bulletin with the heir’s gender, weight, and time of birth was chauffeured in its own car to Buckingham Palace.

I think we sent an email out to my extended family some time during the month after each kid was born.  I know I sent birth announcements for the first kid, but after that it just seemed like too much work.  I just thought that people would figure it out eventually when we kept bringing more kids over to their houses for play dates.  As for the countries I run…they still don’t know anything for sure.  We’re keeping it under wraps until each child begins their reign of terror at the age of 13.

But my true sympathy for Kate began with those first pictures of the new little royal family standing outside the hospital just a couple days after the birth.  I don’t know about the rest of you mothers, but leaving the hospital with a newborn was never my finest hour.  No make-up, droopy maternity wear (because you can’t fit into pre-pregnancy stuff yet, but you don’t have that big bump to hold everything up), my hair frizzy from the hospital shower and the immediate slump back into my bed, and every female part on my body hurting for various reasons…I think if I had to expect hundreds of well-wishers, I’d have asked the Queen Mum if there was room in the budget for some sort of stunt double.

And just when we thought we were done hearing about every detail of the birth…the world focused on what they were going to name this new little bundle of joy.  And in case you missed it, they decided on George Alexander Louis (aka, His Royal Highness Prince George of Cambridge).

Now, that’s a doozy.  Makes me glad I’m not his preschool teacher.

For the royal couple, they actually had to research this moniker to make sure that they weren’t giving their first-born the name of someone who contracted syphilis and beheaded a bunch of people in the 1700s.  My husband and I, commoners that we are, just wanted to make sure that we didn’t name one of our kids after a kid in elementary school that we hated and that the initials didn’t spell anything he or she might get made fun of for later in life. 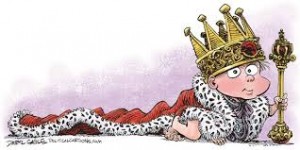 So, after watching all of this unfold, I thanked my lucky stars that I gave birth to three average children who did not cause the world to constantly watch me until I popped them out.  And while I know my kids didn’t get their own pennies and they are saddled with peasant-like names…I’m so grateful that I didn’t have anyone other than my husband photographing my every move as I gained fifty pounds and wore my dressy sweats to work.

I tip my crown to you, Kate Middleton.
You got jewels, girl.