Summer may be winding down but between the backyard barbecues, family reunions and dips in the pool, danger could be one spark or one bad forecast away.

Do you know where your flashlights are?

Preparing for disaster, whether it’s fire, flood, wind or power outage, isn’t as much fun as planning a float trip. But major disasters can devastate a community despite the most elaborate of preparations. Even minor ones can be personally disruptive.

So: You gotta do it. Here are ways to prepare for some of the most common summer emergencies.

“It’s not if you are going to lose power, it’s really a matter of when,” says David Botkins, a spokesman for Dominion Virginia Power.

Stock up on flashlights, batteries, water and food, in addition to any medical supplies you might need. Botkins also recommends homeowners invest in a battery-operated radio so they can listen to weather reports and news alerts during an outage.

Have one gallon of water per person per day for at least three days, Botkins says. Also stock food for several days for everyone in the family and your pets. Botkins also suggests having a couple of cans of gasoline to fuel your car in case local filling stations lose power.

Check battery supplies now, Duracell spokesman Win Sakdinan says. Have plenty in sizes AA, AAA, C and D. Sakdinan says it’s a good idea to have enough to power your radios and flashlights for a week. And have a flashlight or headlamp for every person in the home.

Fully charge your smartphone, tablet and laptop, and consider getting an Internet router that runs on batteries. Conserve energy in these devices by turning them off when you aren’t using them or putting them in battery conservation modes, Sakdinan said.

When the winds pick up, whether it’s a hailstorm or a garden-variety downslope gust, your home and trees will be vulnerable.

But even though Colorado isn’t in Tornado Alley, the monster storms still happen. Homeowners should take warnings about tornadoes or high winds seriously. Identify a room in your home where you will be safe during high winds or tornadoes. It should be an interior room on the lowest level of your house, away from windows.

Inspect roof, windows and doors now. Repair or replace any loose, damaged or missing shingles, and check the attic for swollen wood or moisture that could indicate a leak in the roof. Make sure the caulking on your windows and door jambs is in good condition.

Check your trees now for potential hazards. Any branches more than six inches in diameter that hang over your home (or your neighbor’s home) should be taken down if they look dead or damaged. If you are not sure about a tree or limb, call a certified arborist to get an inspection.

Check gutters now. Sudden downpours can lead to serious structural and other damage to your home: drywall, carpeting, furniture and major appliances can be damaged. Leaks can cause mold to grow.

“The number one thing is to keep gutters functional. They shouldn’t sag or spill and should be kept clean of debris,” says J.D. Grewell, a Silver Spring, Md., home inspector.

“Downspouts should not be damaged, and once water gets to the ground, it should have a splash pad at the bottom of each downspout or a drain to get water away from the foundation,” he says. If your neighborhood is full of mature trees, your gutters may need cleaned two or four times per year.

Inspect window wells.Keep them cleaned out and put a layer of gravel in the bottom. Consider plexiglass covers.

According to the National Fire Protection Association, there are 7,100 home fires per year that involve gas grills, and 1,200 per year involving charcoal or other solid-fuel grills. Be sure to carefully inspect equipment and go over safety tips with your family.

“The best advice we have is to make sure to keep grills and anything with an open flame on it, whether tiki torches, citronella candles or firepits, away from anything combustible,” says Gregg A. Karl, a captain in the Arlington County (Va.) Fire Prevention Office.

Never leave anything with a flame unattended; make sure fire is totally out before you leave it at the end of an event. Never use a grill in a garage.

“We suggest a three-foot zone around the grill, whether it’s charcoal or propane,” says Deborah Hanson, spokeswoman for First Alert, manufacturer of safety products. “Keep kids and pets away and keep it away from siding, deck railings or overhanging branches. Clean the grill regularly and always remove the grease buildup.”

Chris Hartley, vice president of marketing for Blue Rhino, says consumers should test propane grills for leaks with a solution of water and dishwashing detergent applied to connection spots. “If you see bubbles, you have a leak, and you have to seek repairs,” he says. Keep a fire extinguisher around, even if you’re not grilling — one that you know how to use. And if a fire breaks out, first call 911 before trying to fight it.

“We would rather come out and make sure the fire did not extend out,” Karl says, “than come back two hours later with people trapped in the house because they did not call when it initially happened.”

The Colorado Office of Emergency Preparedness and Response has an emergency-kit supply list and a calculator for water and food amounts: whatifcolorado.com 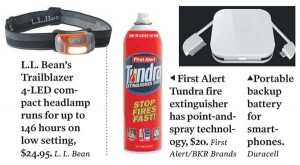 In your disaster kit

To be prepared for summer storms, power outages or wildfire evacuations, have these items on hand:

• Nonperishable food and can opener