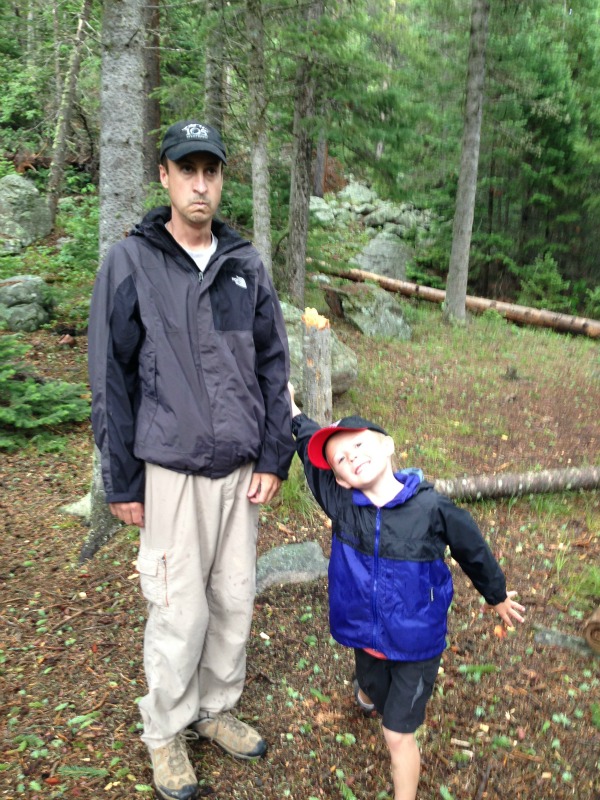 I have tried to instill a love of nature in my kids–just last week we went hiking four times, my daughter recently returned from YMCA of the Rockies’ traditional overnight Camp Chief Ouray and at the end of July they’re both enrolled in Avid4Adventure’s Survival Skills Camp. We are an outdoor-loving family!

But my favorite childhood memories are of camping and that is one area in which we’ve fallen short with my own family.  There is nothing like the sense of community at campgrounds, playing with new BFFs, eating tin foil dinners and s’mores, exploring and exploring some more, and telling stories around the campfire.

Here’s a recap of our camping trips since having kids.

Trip 1: Hadley had just turned 1 and was a horrible sleeper so she wailed all night long two nights in a row. Our campsite at Golden Gate Canyon State Park was on a slope. Hadley had just learned to walk so was falling over every few feet and when she wasn’t face-planting, she was trying to crawl into the fire pit. Our three-day weekend was cut a day short. 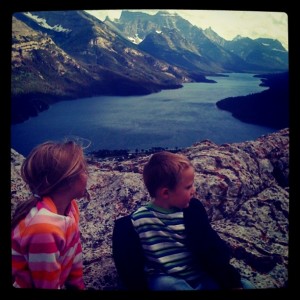 Trip 2: We took a few years off from camping to get pregnant and have our son Bode. When he was 2, we joined our good friends at Eleven Mile State Park. Never been? Keep it that way. I’d read about it in FamilyFun magazine and it was a huge, barren disappointment. In addition to camping, capsizing and crying, my baby had the most disgusting, explosive case of diarrhea and I spent hours at the camp laundromat cleaning out his car seat and clothes. (Ugly details here).

Trip 3: Waterton Lakes National Park, Canada. This is my favorite place on earth and I was ecstatic to introduce my kids to this wonderland that borders Glacier National Park. Sure there were minor hiccups (such as near-hurricane-strength winds) but it was our best camping trip to date.

Trip 4: Bear Lake State Park. Last year, Mile High Mamas partnered with Coleman for the Great American Campout. It had all the fixins for an amazing weekend with horseback riding, games, gourmet camp meals and kayaking. But do you remember that record-breaking 105-degree day last June? ‘Nuff said. 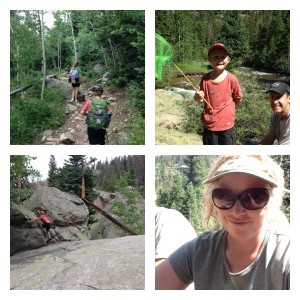 Trip 5: Camp Dick last weekend. This was going to be our year. The kids are 7 and 9 and the perfect ages for camping. Check-in wasn’t until 2 p.m. so we had a few hours to kill when we arrived at this campground set in a glacial valley just off the Peak to Peak Scenic Byway. The kids caught butterflies and threw rocks in the adjacent Middle Saint Vrain Creek and we hiked a portion of the Buchanan Pass Trail.

We have been united with our fellow Coloradoans in praying for rain to defray the horrible wildfires…we just didn’t want the drought to end right then. All was going shockingly well until we felt our first raindrop. We’d waded through near hurricanes and diarrhea; a bit of rain wasn’t going to deter us.

Then it started down-pouring so we raced back to the car and ate lunch. Earlier, we’d spotted the remains of the previous night’s hail storm but miracles–the weather broke a half-hour later and we still had plenty of time to explore before we could set-up our tent.

Adventurous Hadley (who no longer falls every few feet and cries all night), discovered a faint trail on the other side of the creek so we bush-whacked our way to my children’s version of wonderland: a massive boulder field. We spent the next hour free-climbing these rock monsters and Hadley and my husband braved a steep slope to a cossetted cave. I hung back with my more-cautious Bode who called out encouragements such as “you know you can crack your head open and slide all the way down.”

Kid needs a lesson or two on pep talks. 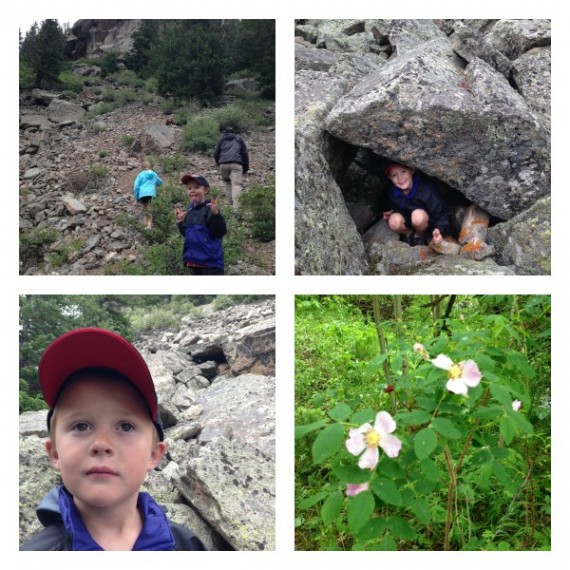 Then all hell (or rather, hail) broke loose and it could not have come at a worse time. We were forging back through the forest when Bode slipped and hurt himself. Not even 5 seconds later, hail started pounding us and blinded, we lost the trail that was already barely there, forcing us to wade over a swamp land and practically toss now-hysterical Bode across the creek.

When we arrived at the road, we still had over a mile to where we’d parked our car at the trailhead but our soon-to-be acquired campsite was right around the corner. “I’ll run and get the car and you go to camp,” I bravely volunteered. Come hail or high-water, I would lead my family to safety!

I raced through the campground, hail pelting and drenching every inch of my body. It seemed like an eternity before I reached the car but I raced back to our campsite and saw my poor little family hunkered down under a tree trying to shield themselves from the frozen sheets of ice.

“We’ve taken a vote,” my husband announced.
“What is it?” I already knew the answer.
“We’re ready to go home.”

I looked at our campsite, the mud puddles thick from the previous night’s storm were now filled with snow. We could have toughed it out if we were staying in a camper but there was nowhere to setup our tent.  And most importantly, the sky ‘s furry was just getting started.