Signs of economic recovery are on the horizon. According to a survey conducted by Visa and released last Tuesday, the average amount placed under the pillow in 2012 is $3.00, a 15% increase from the 2011 tooth fairy fiscal reporting figure of $2.60 per tooth. And much more than the average amount my kids find under their pillows.

Gosh, when I was a kid (here we go again, say my kids rolling their eye) all I got was a penny under my pillow. OK, that’s not true. I usually found $0.50 for the standard tooth with a molar yielding a crisp dollar bill.

The tooth fairy has been generous to my kids (in my estimation) with two crisp dollar bills going under their pillows. When my son (finally) lost his first tooth at age six, he swears he was the oldest kid on the planet to lose a first tooth, he said he wanted $10 and he wanted to keep the tooth.

We talked him down to $2 for the tooth upon agreement of the stipulation that the tooth fairy would not take the tooth. The tooth fairy understood that if the tooth was tucked in the nightstand drawer instead of under the pillow then the tooth stays.

There does appear to be a great range of amounts left under the pillow these days. I’m sure this difference occurred back in my day too but it seems today’s range has become as wide as the Milky Way.

Last year, the little girl who loves down the block was over the moon with excitement when she found $20 under her pillow. She paraded around the block with the bill. It was her first tooth. Daggers shot my from children’s eyes to my general direction.

Why, they asked, would the tooth fairy give different amounts to different kids? Kait, my youngest was happy with the answer that the tooth fairy chooses the best amount for each kid. Jason saw right through it. This simple question was a defining moment in my son’s life. The tooth fairy illusion was shattered for him.

Upon losing his next tooth and rejoicing in the two dollars under his pillow, Jason thanked me and not the tooth fairy, for the windfall.

The tooth fairy bar was in fact raised in my house this year to $5 for a molar. Perhaps the tooth fairy was feeling a little sympathetic for my children who must be the only kids in the world that don’t receive an allowance. At least that’s what Jason told Kait about the rise in the dental economy. 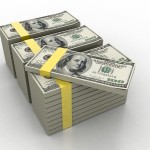 How much is too much tooth fairy money? How much is too little? In total, I got less than $20 for all 20 of my “baby” teeth. My neighbor’s daughter stands to rake in $400 for her tiny pearly whites.

My poor, poor children are in line to get close to that 2012 average of $3.00 per tooth, a paltry $60 for all those canines and incisors. Go ahead, call them paupers.

I’m good with this amount even when my kids look a bit forlorn hearing that other kids receive more for their dental treasures. I’m also good with not giving my kids an allowance these days (years). My original position on tooth fairy economic still stands in mt household: the tooth fairy chooses the best amount for each kid.

Will the tooth fairy’s dental stimulus package reach your household in 2012? How much did you find under your pillow? How much do your kids find?