A guide to hiking with kids in Colorado

She wasn’t there, but Maureen Keilty still shudders when she thinks about the terrified youngsters being dragged up Mount Sherman as a storm approached.

“It just haunts me,” Keilty says. “This mom called me out of the blue to tell me about it. These kids were crying, and the mom asked the adults, ‘What’s going on here?’ And they told her, well, this is in this ‘best hikes’ book, and we have to get to the top.”

Keilty loves Mount Sherman, and yes, you will find the fourteener listed as one of the 100 trails in her book, “Best Hikes with Kids Colorado,” the latest edition of the guide she first wrote more than 20 years ago.

But forcing weeping kids up a trail? That’s the fast track to turning them off hiking for good, she says.

“Praise, patience and playfulness, those are the three things you always have to have along with you on any hike with kids,” the Durango-based Keilty says. “If you don’t have that, you might as well not go.”

When Keilty began working on this guide for kids — she also penned a similar book on hiking in Utah, as well as “National Geographic’s Guide to the Outdoors, Southern Rockies” and the outdoors guide “Durango” — she didn’t have her own yet. That changed — literally the day after she turned in the first edition, when she gave birth to her son, Niko.

“It was a nice bit of things coming full circle when I turned in this manuscript for the fourth edition on Niko’s 21st birthday,” she says. “And he’s still hiking, although his way is to strap a kayak on his back into remote areas to paddle out.”

Keilty says Niko was an excellent test subject for the miles and miles of trails they covered over the years — often with one or more of his friends along, which she highly recommends as a way to keep things fun. “For this latest edition, though, it was mostly just me and my husband, Dan (Peha),” Keilty says. “Dan figures we did about 200 miles on foot and 2,100 on our tires. It was a great way to keep in shape, that’s for sure.”

But as much as hiking is a physical challenge, Keilty says she knows the mental component can be just as much of a factor in the outcome, and that’s where she believes parents struggle with their kids and the outdoors.

“Parents read the guides, and then they want to get out there, and that’s their chance to brag about their kids and get their day’s hike in,” she says. “But no, you’re not going to do that if you want to do right by your kids and have it be a good, positive experience.”

Instead, Keilty recommends considering what the day is going to look like from the kid’s perspective.

“You know how you feel when your head starts getting in the way of your goals,” Keilty says. “Keep them focused. Think about how you can distract them from the same things that distract you: being tired, hungry, overheated.”

She adds that choosing the right hikes for the right ages, group sizes and interests can make a big difference, as well.

When she thinks of her favorite hikes, a number of factors come to mind, but one thing truly stands out. “I ask, ‘Does it have a turnaround point?'” she says. “I think that’s one of the top things. You can have a turnaround and still have that feeling like, ‘Oh, we did it,” instead of having that feeling of defeat. Then kids will feel good about the next time.”

Letting the day unfold and enjoying whatever happens should be the ultimate goal, though.

These are some of Maureen Keilty’s favorites (and she tells why she likes them) from more than two decades of hiking around the state, divided by region the way they are in her guide.

Tips for hiking with kids in Colorado

After more than two decades of hiking with her own son and his friends and writing several guidebooks on hiking with kids in two states, Maureen Keilty has become a bit of an expert on the subject. Here are her suggestions for making the experience the best possible. For more, check out her guide, “Best Hikes with Kids Colorado” (The Mountaineers Books).

Be safe and pack smart. Start early, know what to do in a lightning storm and carry sunscreen. Bring the “10 essentials” — a list of which can be found in the guide as well as at the Colorado Mountain Club’s website at cmc.org — along with snacks, toilet paper and a plastic bag, a whistle for kids to carry in case they get separated and rain gear. 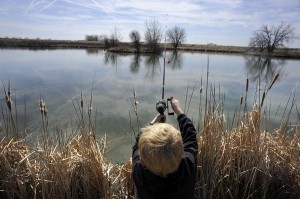 Bring a buddy. “Kids are naturally competitive, and you can use this to your advantage,” Keilty says. “They will try to outdo each other in terms of not getting tired or staying on the trail.” They also will keep each other motivated and interested in their surroundings.

Set small, easily obtainable goals. Things as simple as a reward for getting to the next switchback or going for 10 minutes before lunch. “Games such as, ‘Does anybody see anything pink that matches my shirt,’ things like that,” Keilty says. “It keeps them away from, ‘I’m getting tired, I hate this.’ The key is to keep them from starting to say that in the first place.”

Discourage sitting. “Once they start, it’s hard to get them back up again,” she says. “It’s energy-draining, and the more they’re going to start feeling lazy and think, ‘OK, I can just keep sitting here.” Motivate movement with games and rewards for meeting goals, and stand at rest stops and water breaks.

Stay enthusiastic. If you aren’t excited, they won’t be either. When your kid finds something they are interested in, respond in kind. “I was up on a trail recently and a little girl had found a banana slug,” Keilty said. “I think they’re really gross, but I was like, wow, look at that, can you find its ear, how does it move?”

Look for hiking areas with nature centers for younger kids. Nature centers are becoming “more sophisticated,” Keilty says. “They’re like going to cartoons these days, as an adult… we love them as much as they do.” When kids tire of the trail, they can cool off, mess around with interactive exhibits and use the restrooms.

Why: It’s got year-round appeal, it’s a loop, and it’s close to both Colorado Springs and Denver. “It’s a boulder-scrambling, pond-probing, quiet canyon getaway,” Keilty says. “It’s got a little historic feature, an old dam, a great nature center, and this stream that pools, so it’s really fun to explore.” She adds that the canyon walls are warm in the winter and offer shade in the summer. parks.state.co.us/parks/castlewoodcanyon, 303-688-5242

Why: Also year-round, this hiking oasis in the former chemical-manufacturing complex offers a wide variety of options, from the “incredible” nature center to multiple loop hiking options and a lake where kids can “walk” on water. “It’s a floating walkway that’s just amazing,” Keilty says. “Kids just love it.” fws.gov/rokymountainarsenal, 303-289-0930

Why: Still close to the metro area, this picturesque and unique area to the east of Colorado Springs is described by Keilty as looking like “rainbow sherbet melting into the prairie.” She explains that it’s called the Paint Mines because American Indians would use the rocks to make paint. “This is a place where hiking is time-sensitive,” she says. “In late May, right around dawn, pulling up here is just magical. The temperature, the colors, it’s so intense.” elpasoco.com/parks, 719-520-6375 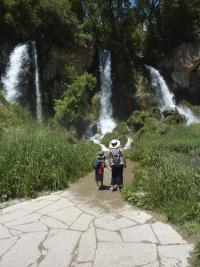 Why: Located midway between Grand Junction and Eagle, the Coyote Trail here is a showcase of waterfalls. “You walk over this suspended walkway, and the kids can hang out over the waterfall and look down,” Keilty says. “It’s so cool.” She adds that this is an ideal destination for beginning campers, because the campground here is “very civilized,” and the nature center and fishing are top-notch. parks.state.co/us/riflefalls, 970-625-1607

Why: Keilty calls these her answer to the question, “Hey, we’re going to Rocky Mountain National Park, so what should we do there?” She believes these are the best of the best in the park for kids: they offer waterfalls, ponds, a “Japanese-style view of trees over a foggy, misty pond.” nps.gov/romo, 970-586-1206

Why: It’s the most unusual of all the hikes in the book, and possibly the state — a mall-side trail lined with stone sculptures from Zimbabwe. “They’re really fun-looking, imagination-provoking statues,” Keilty says. “They placed them in different kinds of settings. I just figured, that’s kind of unusual, the kind of hike people can only do with their kids.” chapungusculpturepark.com, 970-461-8020

Why: One of her top favorites in the state, Keilty points out that this one is “way out there.” West of Fort Collins, it’s still a popular spot year-round, a 71,000-acre park with “so much going on there,” she says. “I was stunned. They have a great visitor center, where you can be nose-to-nose with a stuffed moose, then go out and spot a real one.” The park also offers fishing and camping (yurts, too), as well as an elaborate geocaching program. “Plus it’s a great winter destination,” she adds. parks.state.co.us/parks/stateforest, 970-723-8366

Why: “We went to this desert canyon in the middle of July and lucked out on this one,” Keilty says. “It’s like diamonds. That’s isinglass, and it even looks like snow in some places.” There are stream crossings and a cave in this extremely kid-friendly place. blm.gov/co, 970-244-3000

Why: It’s hard to get to, but the name alone usually gets kids excited. The trail passes mini waterfalls and takes you to a mining camp; it also offers views of Mesa Verde National Park and Sleeping Ute Mountain at the summit. “The summit is pretty easy, and it’s got this grand panorama,” Keilty says. “It’s worth getting to, because there are so many options and so many appeals, and the trail is really well designed.” fs.fed.us/r2/sanjuan, 970-882-7296

Why: One of Keilty’s top picks for a family overnighter, Highland Mary Lakes can take one night or two, and it’s a toss-up as to whether you’ll see more elk or wildflowers. “You’re up on this broad tundra, and the lakes and streams and flowers, wow,” says Keilty. “This is an ‘oh, I just love it up there’ kind of place.” fs.fed.us/r2/sanjuan, 970-247-4874

What are your favorite hikes to do with your kids?