You need to read the new book, Up–A Mother and Daughter’s Peakbagging Adventure by Patricia Ellis Herr if you:

Basically, this should cover pretty much every Colorado mom.

Though I enjoy reading, I don’t have a lot of time to do it but my interest was immediately piqued when I heard about Up because I am passionate about instilling a love of the outdoors in my children. Author Trish Herr felt the same way. Her 5-year-old daughter Alex’s over-the-top energy levels led Trish to propose they try to tackle forty-eight of New Hampshire’s highest mountains. Trish had no expectations or time limit but it very soon became apparent Alex was capable of big things. 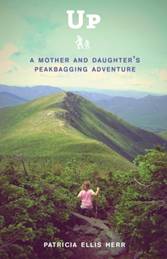 There was a learning curve for both of them, which provides for some suspenseful and harrowing moments in the book as they climb these adult-sized peaks. But Up is not a guide book–it is an inspiring, emotionally honest account of a mother’s determination to buck the naysayers and encourage fearlessness and independence in her daughter. She wants people to know “that small doesn’t necessarily mean weak; that girls can be strong; and that big, bold things are possible.”

I read Up in two sittings: Flying to Utah and on the return flight. It is easy, captivating, magnetic, triumphant, suspenseful and most importantly, inspiring. I had the opportunity to interview Trish about her experiences.

You focus a lot on your girls’ hiking accomplishments but were you much of a hiker growing up? How did you get involved and at what age?

I didn’t hike as a child. My parents weren’t hikers, so I was never exposed to the activity. Once I left home, however, I began walking long distances on a regular basis. It wasn’t hiking in the sense of boots and backpack, but it was definitely something related. For example, I’d walk from downtown Chicago to Evanston, IL two or three times a month. When I lived in Manhattan, I made a habit of walking back and forth through midtown, covering every street from end to end. In Cambridge, MA, I’d walk from Harvard’s main campus to the Medical School in Boston. So while I didn’t don a backpack until I began hiking 4Ks with Alex, I did have experience walking for hours and hours at a time. 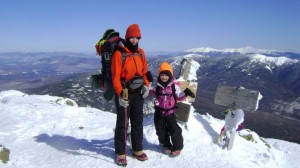 What would be your advice for the beginning hiker?

Join a group or find an online forum and learn from others. Once you feel comfortable getting out there on your own, do it — but never be ashamed to turn back for any reason whatsoever. The mountain will always be there.

You spoke about what to take winter hiking and on longer, rigorous hikes. What should be in every mom’s backpack, even if she’s just doing a casual, three-mile hike with her kids?

What does Alex think of all the excitement surrounding the book and her accomplishment?

Alex is happy about how well the book’s being received and she’s proud of her accomplishments. That being said, she’s a humble child. She’ll enthusiastically tell you all about her adventures if she’s directly asked, but she won’t initiate the conversation. Her days continue to run more or less as they always have. She has her homeschooling work and her extracurricular activities, and she spends a lot of time hanging out with her friends and her sister, Sage. So she’s joyfully taking this all in, but her feet remain solidly on the ground. 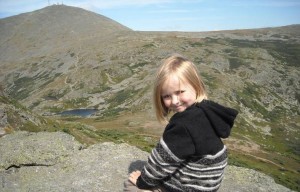 Do you have a most memorable hike with your daughters?

Mt. Tecumseh with Alex and Sage on February 13, 2010. It was Sage’s first 4K. She was four years old and she insisted on giving Mt. Tecumseh another go (she first tried it when she was three). Alex had just turned seven and was by now an experienced 4K hiker. She and I agreed that we’d take Sage and move at her pace, and that we’d make the hike as silly as possible so that Sage would have a good time regardless of whether or not we reached the top. The three of us had a wonderful hike. I wrote about it in an essay titled, “Six Hours.” That essay will be published on the Books for Better Living website in May 2012. http://www.booksforbetterliving.com/

What is your biggest take-away from this whole experience?

Anything can be done. It might take time and hard work, you might have a lot of false starts, and you might raise some eyebrows — but it can indeed be done.

What is next for the Herr girls and when are you coming to hike Colorado?

We’re still highpointing. We’ll head west this summer (August or early September) and attempt Elbert (Colorado!), Wheeler Peak (NM), and either Kings Peak (Utah) or Boundary Peak (NV). The girls are ready for these ascents — the western highpoints are not much different from New Hampshire’s White Mountains in terms of mileage and elevation gain. We can train here by taking the longer and tougher trails up Mt. Adams, Mt. Madison, Mt Jefferson, etc. The only thing that will be very different out west is the relative lack of oxygen. We plan to spend a lot of time in Colorado acclimatizing before ascending our first high altitude peak of the year.

Also, there are a lot of smaller mountains and rocky trails we’d like to explore here in New Hampshire. The girls and I recently created our own hiking list of 25 White Mountain trails (we referred to Daniell and Smith’s White Mountain Guide, 28th edition, for the descriptions). These trails contain rock scrambles, slides, boulder caves…that sort of thing. Sage named the list “The Terrifying 25” and Alex designed a patch for it. We’ll start exploring those trails this summer. 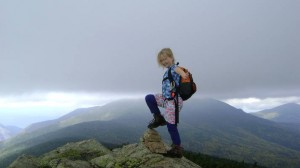 Up: A Mother and Daughter’s Peakbagging Adventure retails for $14.00. Be sure to check-out Trish’s blog, Trish and Alex Hike the 4,000-foot Whites.