American Girl: Give Those Dolls Some Balls!

Let me start by inserting a spoiler alert. I’m not a big fan of the multi-zillion dollar American Girl (AG) franchise.

“Why?” you ask, as you throw down exactly $173.00 plus shipping for a doll that looks like the tattletale who rats everyone out at school, forgettable plaid dress, pair of patent pleather saddle shoes, and an overpriced miniature Goldendoodle you can pick up at Target for $4.99?

That’s why. Well, that and a lack of compelling role models for my daughters.

My seven- and nine-year-old girls feel differently, however, thanks in no small part to the monthly catalogues that arrive in the mail. So in an effort to better understand their fascination, I conducted a non-scientific study of the American Girl world. Curious to see if I could find a doll to fit either of their dispositions, I trolled the website for hours in an attempt to identify a match.

To be fair, I can see why my daughters, along with millions of other girls across the country, are attracted to American Girl dolls. They perfectly fit the profile of what our conventional “girl next door” culture defines as attractive, and are pretty and bright-eyed, with flawless skin and thick, glossy hair. The original dolls each tell a personal story, and their narrative is filled with positive traits including honesty, kindness, creativity, and optimism.

These are great qualities, but in the modern-day world my daughters are learning to maneuver, they aren’t enough.

AG’s first line of dolls is based on historical periods, and each comes with a background story attached. Take Addy Walker, a doll who’s “escaping slavery to find her father and brother.” I’m all for acknowledging the past, but slavery? Couldn’t the executives at Mattel have come up with something a little more inspirational for a ten year-old African American, or any young girl for that matter, to embrace other than one of the most oppressive facets of American History? What about a doll made in the spirit of Rosa Parks or a mini-Coretta Scott King? 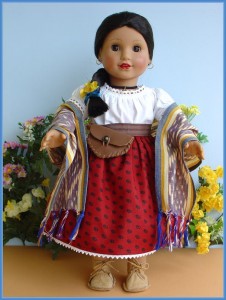 In the same vein, historical character Josefina is “from her family’s New Mexican rancho.” With a serape over her shoulders and a cross hanging from her neck, is she getting ready to make tortillas to stuff into a piñata for a neighborhood fiesta? Josefina looks like she just stepped off an Old El Paso taco dinner kit, and with similar profiles built on stereotypes, these dolls simply don’t inspire in a world where I expect my daughters to push beyond the boundaries that two-dimensional labels create.

In addition to these offerings, American Girl pitches a more modern doll, cleverly allowing ‘tweens to choose their likeness in skin tone, eye color, and hair (well, sort of…the more “ethnic” options don’t exactly slice in tandem with our nation’s current demographic pie). Because each mini-me comes clothed in a forgettable pair of lavender pants and shirt, your style-savvy daughter is sure to sprint directly to the overpriced unsale rack as soon as she’s created her doll.

And here’s where I have another problem.

While there’s nothing implicitly wrong with cheerleaders and ski bunnies, that’s not how my girls roll. Where’s the snow boarder shredding it down the mountain? The hockey center who just scored a goal? How about a surfer struggling to catch a massive wave?

A lacrosse player and skate boarder move the gender-biased dolls in the right direction, but why not push a decades-old envelope a little and add hip-hop to compliment ballet, and a girl who races a motorcycle instead of a horse?

In other words, give those dolls some balls!

Moms like me (and there are a lot of us) are raising daughters who focus not on what it means to be an “American Girl,” but something with much more depth. We’re working from a global platform as we teach them to be open-minded, multi-cultural, fearless, unbiased, and strong. It’s our hope that they’ll push beyond the superficial borders of pretty and perfect on a fast track toward fierce and outspoken. They may be biracial, adopted, or from fractured families, and they’re all learning to handle life’s ups and downs.

Our daughters are the world’s future leaders, innovators, and pioneers because we’re helping them challenge stereotypes and redefine the meaning of status quo. They are thoughtful, intelligent, risk-takers who aren’t afraid to ask questions, speak their minds, and take a stand.

As mothers, we long to lock eyes with that confident little girl in your line-up of dolls who will grow up to be a scientist, Pulitzer Prize-winning author, or President of the United States…a role model whose inspiration reaches well beyond clichés, matching outfits and perfect hair.

But for me, she doesn’t exist.

Until American Girl offers a reasonably priced, balls-up doll for my girls to cherish, I’ll take my $173.00 plus tax somewhere else.

Now if I could just get the grandparents to back their quest to buy plane tickets for a holiday brunch and trunk show at the flagship store in Chicago, everything will be OK.

Guest blogger Stacie is a married mother of three animated (as in cartoonish) children living in the sunny suburbs of Denver. When she’s not blogging at Gemini Girl in a Random World, she stalks people in her ginormous SUV who text while driving. So if you’re gonna be on I-25 anytime soon, look out.