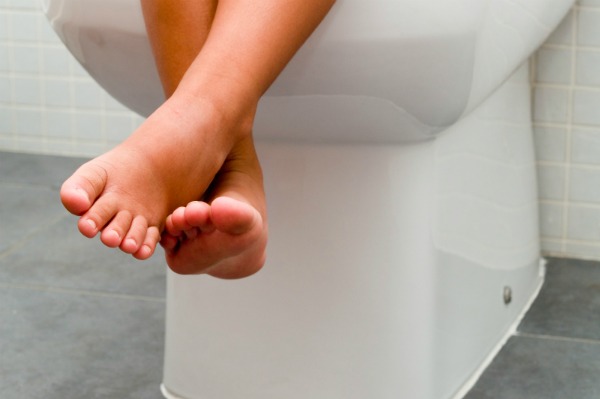 Postcards from the Edge (of the potty training seat)

For some parents, it is a simple process. For others, there are months of nail-biting frustrations. And for a select few (like me), sometimes it felt like our child was never going to get trained. Though it was a trying time, I was surprised to learn there are a large number of children who, even beyond the preschool years, continue to have issues. Thankfully, I can finally say we’re in the clear after many difficult years.

I have a few friends who are currently potty training their kids and so I thought I would revisit those harrowing 3 years and 9 months it took to get her potty trained. You know. The first time.

March 2006: We brought home our first potty amidst great fanfare. Twenty-month-old daughter was enthusiastic about being a big girl and using the potty. It was a bald-faced lie.

Summer 2006: A few of her friends are trained. Our encouragement is met with resistance.

Fall 2006: Shows interest and even pees most of the time in the potty but Brown has yet to make its appearance. “What Can Brown Do For Me?” Find its way to the blasted toilet.

Fall 2006: Announces she is retiring from the potty training business, like it is some annoying boy she is just flinging aside. There is great mourning in the land but we are advised not to pressure her.

Spring 2007: Daughter turns 3 and is obstinate about the mere suggestion of going anywhere near the potty.

Summer 2007: The Descent into Hell. In a last-ditch attempt to potty train her before preschool, The Parents cut her off diapers completely (do not EVER EVER DO this). There were non-stop accidents, wailing, gnashing of teeth and near suicide attempts by the parents. After three horrible weeks, the white flag is waved. A flag that strongly resembles a poopy diaper.

Fall 2007: Enters preschool in pull-ups. The Parents attend the potty training seminar “Oh Poo” at the Children’s Hospital Colorado. Hunky Hubby observes the sardine-packed room and comments, “Every single person in this room is a loser.” They and their fellow losers glean some good tips about providing incentives. Strongly advised by the expert Dr. Bart Schmitt not to nag but just provide incentives to children over three.

Winter Break 2007: The entire family is in town and exhibitionist daughter starts peeing regularly. The Parents capitalize on the momentum and remove diapers completely from the formula. Continues to pee in the potty but resistant to Brown. Parents provide enough incentives to require mortgaging the house when she finally goes.

January 2008: Daughter is obsessed with The Little Mermaid. The Parents buy Ariel panties under the condition that she would not poop on Ariel. The mermaid was drowning in it within hours. The Parents enforced a clean-up-after-yourself policy. The Hurricane remains unphased and is positively gleeful about clean-up duty.

February 2008: The Parents up the ante and instead of focusing on incentives, they concentrate on punishment. For every day Brown does not make an appearance in the potty, they remove a beloved toy from The Hurricane’s extensive collection. Within a week, Brown makes its first appearance.

A celebratory Chuck E. Cheese party is thrown, whereupon at the end of the festivities she confessed,

“I was so excited to see Chuck E. Cheese, I peed my pants.”

What experiences did you have potty training your kids? What methods worked and what didn’t?