What is REALLY in your food?

Pink Slime in processed meats has recently made headlines across the country. In an in-depth investigation on The Doctors television show airing Monday 2/27/12, called What’s REALLY in Your Food?, the docs shared that a chemical found in lice shampoo also shows up in our food and that chickens destine for our dinner table are dipped in chlorine.

Are you concerned about what ingredients are turning up in our food supply? Should you be concerned?

In the past year, media attention generated, in part by Jamie Oliver, star of Food Revolution and Naked Chef , exposed that fast food giants such as McDonald’s, Taco Bell, and Burger King have particpated in the practice of adding a concoction of discarded meat parts mixed with chemicals to their burgers, affectionately dubbed “Pink Slime”.

These mega producers of fast food meat products have each said recently that they will, or have already, discontinued “pink slime” as an additive in their foods.

What’s the harm of discarded meat parts and pink slime?

Chef Oliver stated in an April, 2011 episode of Food Revolution, “in this form [the discarded beef parts] are inedible…This is not fit for human consumption.”

He goes on to say that the FDA allows these discarded parts to be used in food production after it’s been treated with chemicals to kill the bacteria that’s inherently present. We’re talking about the big bugs like salmonella and e. coli.

Companies do not have to list ammonium hydroxide on food labels because the FDA deems it as part of a process and not an ingredient, according to Oliver.

How much is too much? We American’s eat millions upon millions of burgers each year – fast food and supermarket purchased included. A whopping 70% of meat consumed each year contains beef treated with up to 15% ammonium hydroxide. Pink slime treated meat also ends up in school lunches.

Chef Rocco DiSpirito, a guest on Monday’s episode of The Doctors, says the discarded meat bits are discarded for a reason, they should be thrown away.

Dr. Jim Sears, on The Doctors panel, showed a picture of a 12-year-old fast food hamburger that was still in tact, without mold, without any discoloration. Dr. Sears has kept the burger for over a decade to illustrate in his lectures that processed food is not real food. The burger looked much like this photo of another 12-year-old burger taken in 2008, that has made it’s way around the cyber-verse.

Can you tell the difference between a day-old fast food burger and a 12-year-old burger? Neither could anyone else. This is one of the side-effects of chemical additives in our food: the food lasts forever, well, at least 12 years and counting.

To make a point, Dr. Travis Stork, ER physician and lead doctor on The Doctors, brought out a bowl of raw ground beef and added an ammonia-based floor cleaner. Within a few seconds, the doctors and Chef DiSpirito were overcome with coughing from exposure to the ammonia fumes. The offending marinading meat was escorted off the stage. 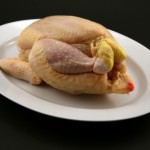 And what about the chickens dipped in chlorine? That’s right, chlorine. According to Dr. Stork, the average American eats 80 pounds of chicken each year totaling about $70 billion dollars in chicken sales! There’s about 8 pounds in my freezer right now.

Chicken is considered a good source of healthy protein. Would the word healthy still be applied if the chlorine content was taken into consideration?

What is the purpose of the chlorine bath? After plucking, slaughtered chickens are placed in a cold bath of chlorine to cool as well as to kill bacteria and prevent cross-contamination of bacteria. Dr. Stork explained that four major poultry producers admitted, off-camera, to using chlorine on their chickens.

A little chlorine isn’t going to hurt, in small quantities, right? That’s the idea but in practice, is this process increasing food safety? The Doctors explained that a swimming pool will contain between 1 and 3 parts per million (ppm) of chlorine but a chicken can be bathed in 20 to 50ppm of chlorine.

To test the theory that chlorine will kill the most common bacteria chicken processors are fighting, salmonella, The Doctors infected a raw chicken with salmonella and placed the contaminated chicken in a cold bath treated with 20ppm chlorine along with non-infected chickens. All the birds were tested after their soak.

The lab results showed that salmonella was found on all of the birds. Another experiment was conducted using a chlorine bath of 50ppm which did kill the salmonella.

The Doctors showed a feature of Mary’s Organic Chicken, a family-owned company that pasture raises their chickens and air-cools instead of using the industry standard cold chlorine bath. Mary’s chickens may be hard to come by in Denver-Metro but you can ask your local supermarket or natural foods store to recommend an organic chicken brand. Mary’s brand of organic turkey’s are available in Colorado for Thanksgiving.

Several stores in the Metro area carry Boulder Natural Meats and Organic Prairie brands of chicken, as well as other brands, which do not utilize chlorine in processing. 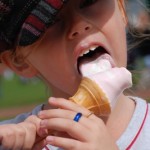 Now for dessert. American eat billions pounds of ice cream each year. Chemicals can also be found in one of our favorite guilty pleasures. Vanilla is still the favorite all-American ice cream flavor but flavor from real vanilla beans is expensive.

Instead of the real deal, companies will turn to a cheaper alternative, an artificial vanilla flavor called piperonal. Piperonal is also an ingredient in lice killing shampoo, according to The Doctors.

Why are all these chemicals turning up in our food supply? The truth is, they have been there for a long time. Consumers want affordable food and manufacturers have answered that demand by producing low-cost foods with low-cost ingredients. The end result is the use of inexpensive additives and artificial ingredients to mimic the real thing but with a lower price tag.

What can a concerned shopper do? The Doctors have several options.

Dr. Stork wanted to make it very clear that he and his fellow doctors were not trying to say that our food supply is not safe or that these additives are unsafe. He encouraged viewers to read food labels and make choices based on what makes most sense for them. Knowing a little terminology as well as understanding available options can lead you to make the best choice for your family.

The Doctors provided a link on their website to the Center for Science in the Public Interest which lists food additives to avoid and provides several in-depth reports of health concerns associated with additives. Click here to view the list.

Are you concerned about the quality and safety of foods you provide your family? Does this, or other recent stories, inspire you to make different choices when it comes to buying food? Does this information make a difference in whether your child buys a school lunch or brings a bagged lunch?

May
26
Tue
8:00 am Family-friendly Public Art Virtu... @ Virtual
Family-friendly Public Art Virtu... @ Virtual
May 26 @ 8:00 am – May 31 @ 9:00 pm
We asked Public Art staff and their families to share their favorite family-friendly pieces of art. We have also included some coloring sheets to enjoy at home. I See What You Mean Coloring Sheet Upper[...]
9:59 pm Museum Fun 101 @ Online
Museum Fun 101 @ Online
May 26 @ 9:59 pm – May 31 @ 10:59 pm
The Museum is currently closed, but have no fear, this group will bring the Museum to YOU! Check out screen-free activities created by our educators to engage your child in learning and fun from the[...]
10:01 pm Online Musical Games @ Inside the Orchestra
Online Musical Games @ Inside the Orchestra
May 26 @ 10:01 pm – May 31 @ 10:00 pm
Play this fun memory game online right now or print a downloadable version here to play at home. You can also purchase them on our merch store to have a beautiful, packaged set mailed directly[...]
10:05 pm Still Working on the Railroad @  Colorado Railroad Museum
Still Working on the Railroad @  Colorado Railroad Museum
May 26 @ 10:05 pm – May 31 @ 11:05 pm
All Aboard—online! The Colorado Railroad Museum is launching a new series of online content and project updates while the Museum itself is closed in response to the COVID-19 pandemic. Regular features include content suitable for[...]
10:07 pm Venom: At-home game @ Golden Puzzle Room
Venom: At-home game @ Golden Puzzle Room
May 26 @ 10:07 pm – May 31 @ 11:07 pm
Venom is an exciting play-at-home game filled with a variety of challenging puzzles. Dr. Montgomery, the leader of a biotech research team has just made an incredible medical discovery! Unfortunately, he has mysteriously vanished[...]
10:10 pm Visit Aurora History Museum Online @ Aurora History Museum
Visit Aurora History Museum Online @ Aurora History Museum
May 26 @ 10:10 pm – May 31 @ 11:10 pm
The Museum may be closed, but we have online resources to explore! The Aurora History Museum invites visitors to check out online exhibits, collections, lesson plans, interactive maps, AuroraTV history videos and more from home.[...]
Jun
1
Mon
10:19 pm Pedaling 4 Parkinsons @ Virtual
Pedaling 4 Parkinsons @ Virtual
Jun 1 @ 10:19 pm – Jun 6 @ 11:19 pm
Recent COVID19 related developments mean that we are not be able to gather in person for our 11 th annual ride, however, we are still determined to keep Pedaling 4 Parkinson’s! Please join us[...]
View Calendar
Add