Fancy Tiger Crafts has been a go-to destination in the Baker neighborhood for clever crafters for the past five years. Its spin-off, Fancy Tiger Clothing, draws a young boutique crowd for men’s and women’s apparel and accessories. Now proprietors of those businesses have moved, chess-like, around the block, and were joined by veteran retailer Buffalo Exchange to give shoppers yet another reason to spend some time browsing on Broadway.

The three recently opened their separate shops under the same roof in a former mercantile space at 51-59 Broadway.

At Fancy Tiger Crafts, owners Jaime Jennings and Amber Corcoran have created an open, airy shop featuring shelves bursting with yarn from more than 30 vendors. Many of the vendors are small, local companies like Lonesome Stone of Granby. Bolts of colorful printed cloth line shelves along one wall, while a rack of Liberty of London prints sits front and center. Bookshelves brim with guides to knitting, crocheting and other needle arts, and an upholstered chair gives customers a place to peruse the works. Old-fashioned lettering painted on the wall advertises “Handsomely Decorated Cloth Fabrics.” In the back of the store is a long community table where people can gather on open crafting nights and for classes on making everything from baby quilts to Japanese coin purses. A fireplace and cheerful yellow- print wallpaper lend a homey feel. “We wanted it to be like an old prairie schoolhouse,” Jennings said. 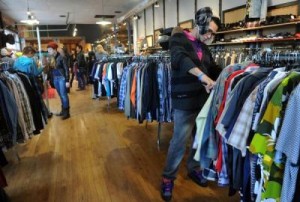 And in two rooms farther back, the real magic happens: 15 sewing machines and several cutting tables are available during classes and for rent by the hour.

Brown carries a number of lines for men, including Top Man, Kill City jeans and Billykirk Bags. Among the women’s clothing lines

Read more: Like-minded fiber and clothing merchants team up in Baker neighborhood’s “anti-mall” retail area – represented are Tulle, and such local designers as Melissa May and Fallene Wells. Many of his jewelry offerings are created by local designers, and Brown also likes finding select vintage bags and jewelry to resell. “Our goal is to try to buy local and repurposed as much as we can, and to educate people on what we’re doing,” Brown says.

Buffalo Exchange has been doing a brisk business since it opened early this month on Broadway, according to owner Todd Colletti. It buys, sells and trades clothing at the store. Men’s is up front, while women’s clothing and accessories are at the back of the store. Free parking alongside the building is a nice perk (but mind the signs and don’t park in the urgent-care spaces across the lot). After more than a dozen years at 226 E. 13th Ave. (which remains in business, selling clothes) Colletti says he’s happy to be near like-minded merchants.

“I love Broadway. It has a long Denver tradition and was once called the ‘Miracle Mile,’ ” Colletti says. “With all that drive-by and walk-by traffic, we’re a lot busier. And because we bought the space, we were able to do things with it. We have more light, garage doors we can open up, evaporative cooling, storage for back stock, a kicthen and space for employees for functions.” 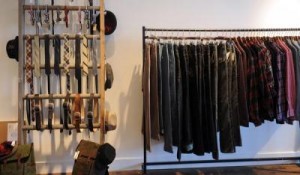 A former Woolworth’s and J.C. Penney location, the building has features that work for retail, including shelving and a conveyor belt.

“I’ve always dreamt of doing an anti-mall and now we have it,” Colletti says.

What do you get when you cross a tiger and a buffalo?

A Tigalo, of course, which is the amusing moniker created by the trio of merchants who have joined forces at 51-59 Broadway. The name calls to mind the quirky movie “Napoleon Dynamite,” whose title character draws a “liger” and says: “It’s pretty much my favorite animal. It’s like a lion and a tiger mixed … bred for its skills in magic.” Tigalo Block Party grand opening celebration, 7-10 p.m. Feb. 3.