“Will to Win:” Excerpts from The Denver Post’s chronicle of Tim Tebow

he Broncos just completed one of the most remarkable seasons in franchise history, rallying from a 1-4 start to win the AFC West and then upset the Pittsburgh Steelers in a memorable first-round playoff game. Mike Klis, Broncos beat reporter for The Denver Post, chronicled the inspirational story of Tim Tebow and the Broncos’ return to the playoffs in a soon to be released book, “Will To Win.”

Included here are excerpts from Chapter 3 of “Will to Win” focusing on Tebow’s youth, and lessons he learned long ago that help shaped the player he is today.

To order “Will To Win: How Tim Tebow and The Denver Broncos made 2011 A Season to Remember” go to denverpost.com. The e-book is $4.99 and will be available early this week. The print book sells for $19.99 and will be shipped out later this week. 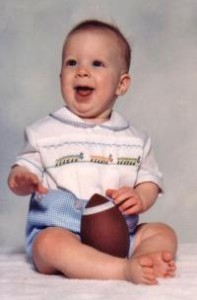 Because his father would not allow Tim to lift weights. Not until he reached puberty. Bob Tebow used to preach the workout habits of Herschel Walker to his youngest son. When Walker was considered the best college running back in the nation at Georgia, his workout routine became legendary, both for its volume and simplicity.

Walker never lifted weights. At age 12, though, he was doing 300 push-ups and 300 sit-ups a day. Think it’s coincidence that Tim Tebow settled on 400 and 400 for his daily routine?

“But I would get so sore,” Tebow said. “Finally, I went to my dad and told him how sore I was getting. He asked me, ‘How often are you doing them?”

By the time Tim was 14, his father gave in. Tim’s older brothers, Robby and Peter, were lifting weights, and Tim figured he needed to get stronger to keep up.

At age 14 and weighing about 175 pounds in the summer between eighth grade and his freshman year of high school, the home-schooled Tebow did 315 curl reps of a 55-pound bar. It’s not an exaggeration to say the lactic acid buildup would not allow him to straighten his arms for three days.

Why did Tebow do 55-pound curls 315 times in one set? Because it was a summer-camp contest. He was the next-to-last contestant. When it was his turn, the rep number to beat was 55. Tebow didn’t stop at 56 because the guy behind him, the last guy in line, was big. Really big. So Tebow wanted to do all he could to post a number difficult to approach. The big guy didn’t come close.

Bob Tebow, a Baptist pastor in Florida, and his wife Pam felt the call to be missionaries in the Philippines because of their affection for the large population of orphan children in the island nation. The family – which included daughters Christy and Katie and sons Robby and Peter – moved there in 1985.

The Tebows lived in Manila until Tim was 3, when they moved back to Jacksonville, Fla. When Tim was 5, Bob Tebow got the bright idea of moving the family to a farm.

“It was such a blessing,” Tebow said. “We got it at a government auction. It was a great place to have five kids grow up and CLICK HERE TO READ ON