Nissan’s Holiday Quest & What Vehicle Do You Drive?

I am officially in the market for a new vehicle.

Actually, I didn’t even know I was looking until I was asked by Nissan to be a part of their #HolidayQuest campaign to test-drive their 2012 Nissan Quest. As my kids eagerly explored the minivan and I inhaled that glorious new-car smell while fiddling with the iPod connectivity, I knew it was out with the old (my 2003 Honda Pilot) and onto the new (vehicle TBD).

I was originally supposed to test-drive the Quest over the winter break and we planned a road-trip to Utah. But when a house fire caused tens of thousands of dollars worth of damage to my parent’s home in Canada (including destroying their vehicles), we postponed our test-drive until early-January. As a side note, Quest had offered a $500 gift card to a charity of my choice and they generously donated that to my parents to help recover essential items until their home owner’s insurance kicked in.

The first thing I noticed about the Quest is the technology (something my older vehicle is acutely lacking). 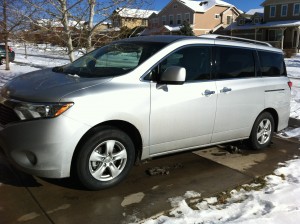