A letter to Denver Broncos quarterback Tim Tebow’s Wish 15 program pushed a 16-year-old Loveland girl to the front of a long line of young women whose hearts flutter at the idea of spending a little time with the star player.

On Thursday, Bailey Knaub learned she’d get to spend time with Tebow and his family before and after the AFC wild-card playoff game Sunday.

“He’s been my favorite since he was in college. He’s such an inspiration, such a strong Christian,” said Bailey. “I was very nervous. My heart was going a million miles an hour. I was trying not to to squeal like a little fan girl.”

Tebow mentioned Bailey, a junior at Thompson Valley High School in Loveland, during his post-game remarks Sunday night, noting that the big overtime win against the Pittsburgh Steelers​ paled in significance when compared to the health struggles she has faced. Bailey has Wegener’s granulomatosis, a condition that has forced her to undergo 73 surgeries in 10 years, the most serious of which was the removal of her left lung in 2010. 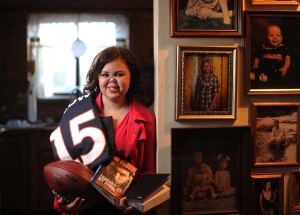 Bailey, her sister Gentry and her parents spent a few hours with Tebow’s siblings and parents prior to the game Sunday.

“They are so friendly,” said Bailey’s mom, Kathy Knaub. “It’s like we were family. We talked a lot about faith and their farm.”

The families also prayed together.

After the game, Tebow introduced Bailey to other Broncos players, including wide receiver Demaryius Thomas​, who caught the last pass of the game and ran 80 yards to score the winning touchdown.

Today, after a meeting that she expected to be little more than the big-deal player stopping to say “Hi,” Bailey said she feels more confident. After all, she said, she got about 20 hugs from everyone in the “very huggy” family “and a ton from Tebow.”