For Highlands Ranch resident Jennie Sanford, “couponing” is a verb and an avocation, saving her up to 90 percent on her grocery bill.

But here’s where her story veers from the well-trod path of extreme couponers: Sanford, whose day job is in banking, uses her extra freebies and pennies-on-the-dollar purchases to help others.

In 2009, when a friend introduced Sanford to what she calls “tactical couponing” — using only coupons that double in value, matching them with in-store specials and gift card incentives — she morphed into a fierce shopper.

There were times she walked out of grocery stores with both groceries and cash in hand, leaving dazed cashiers in her wake. Her storage shelves were piled three deep.

Then Sanford learned that her cousin had become a single mother of two almost overnight after the woman’s husband had left her with little money or other resources, and empty kitchen cupboards.

“That was when I realized that couponing was about far more than saving myself money,” said Sanford, a self-assured 26-year-old.

She went to her stockpile shelves and began filling bags with pasta, sauce, crackers, nuts, soup and other shelf-stable food. She added cleaning products, paper towels and toilet paper. Nearly everything was a product she’d gotten for free, or at a fraction of its retail price.

“What a feeling it was to bless someone so dear to me without having to think twice,” she said.

From that moment on, she clipped coupons thinking of other families she could help. She continued helping her cousin’s little family, but she also found others — “friends, relatives, total strangers” — who welcomed her donations.

Among them was a family facing eviction. Sanford thought of how much money coupons had saved her and decided to do a little math.

Counting up her receipts for 2010, her first full year of dedicated coupon-assisted shopping, she calculated that she’d spent $1,018.57 on groceries, toiletries, cosmetics and cleaning supplies.

She decided to help the family by paying the back rent, and giving them enough cash for a fresh start.

“I could never have done that before becoming a couponer,” she said.

Then, the organizer of a Thanksgiving outreach at Sanford’s church announced they needed someone knowledgable about using coupons to help needy families with their budgets. In the crowd of outreach volunteers, the words seemed meant for Sanford alone.

“That night, God confirmed something in my heart,” she said.

“What if there was a way for me to take all the knowledge I had gained over the past year and share it with others so that they, too, could not only support their families, but be able to support others?”

And so Sanford created Bargain-Blessings, a coupon blog that has attracted more than 60,000 followers in less than two years. She gives monthly workshops that draw nearly 200 people, including other hard-core coupon fans who learn tips from Sanford.

“I don’t consider myself an extreme couponer,” she said, referring to cable TV shows about people who dedicate 40 hours a week or more to clipping and shopping.

“I consider myself a practical couponer.”

She calculates that she spends only two hours a week clipping coupons and browsing online coupon websites. She keeps her coupon research time minimal, thanks to meticulous organization — she keeps coupons categorized in a binder that’s periodically cleared as coupons expire — and self-discipline. Her tidy south Denver townhome is minimalistic. No tchotchkes and clutter here. Even her Christmas decorations are restrained.

“Why should I buy more than I need?” she asked.

“It’s wasting money if I don’t need it.”

BargainBlessings.com largely is a labor of love, though it’s drawn advertisers and supporters including (full disclosure) The Denver Post and the online coupon aggregator Savings.com.

Sanford encourages her followers and workshop fans to start slowly, clipping or printing out coupons and aiming to maximize their value by shopping at stores that double a coupon’s value up to $1 per coupon.

“Read the small print,” she advised.

“It’s what the words say, not what the picture shows. If it says ‘any’ Colgate product, that’s different from specifying a toothbrush or toothpaste. And the best coupon deal is always going to be the smallest size available, even though that’s counter to what most of us have always thought.” 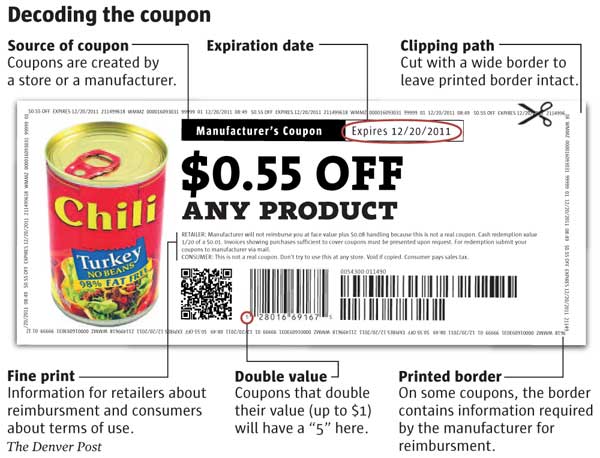 Learn the lingo to get the most out of coupon advice, and know the difference between a coupon that can double and one that won’t.

Look at the first cluster of the bar code on a coupon. If there’s a “5” just before the number that’s contained within the UPC code, then that coupon will double. If that number is a “9,” it won’t double.

When you’re reading Bargain Blessings and other coupon advice sites, it helps to know the acronyms. Here are some of the most common:

OOS: Out Of Stock

OYNO: On Your Next Order

TIA: Thanks In Advance

WYB: When You Buy

YMMV: Your Mileage     May Vary

If you see an acronym that you don’t recognize, search for it at urbandictionary.com.