Triggering An Avalanche of Autism Research: A Colorado Family’s Spotlight in the Snow

Guest blogger from Aurora Laura Neiman, a.k.a. LaLaGirl, was recently featured in a national nonprofit’s year-end fundraising video. This is her heartwarming story about the experience for her family and overcoming her anxiety of the unknown.

Early in October, my friend Dawn Crawford pitched me the idea of heading up to the mountains with my kids to film a fundraising video for The Autism Science Foundation, a nonprofit which provides money to research scientists searching for the causes of autism so that better treatments may be developed.

The Autism Science Foundation’s Recipe4Hope campaign, a month-long fundraising effort launched entirely through social media and email, raised almost $11,000 last year. As a mom of a child with autism, this is a cause near and dear to my heart. However, as a mom of five children, including two sets of twins in elementary school and a teenager in high school, the idea of coordinating school drop-offs, pickups, and childcare so that I could head up to the high country for a day of filming sounded like a big fat drag. I told Dawn I’d think about it.

The idea of my little boy, Pablo, being the star of this year’s video campaign was definitely exciting. I was super apprehensive, though, because Pablo, like many autistic children, doesn’t always “perform” well when he’s in unfamiliar circumstances and out of his routine. In fact, it’s actually fair to say that he can be pretty naughty, to the point of running away while shouting, “Go away!” I kept playing out worst-case scenarios in my head. From the fairly mild: one of the kids throwing up in the car while heading up I-70, to the downright grim: my children wandering off at Loveland, requiring rescue from the ski patrol.

Dawn must have sensed my uneasiness, because she reassured me that the minute things stopped being fun for the kids, they’d stop filming. After obsessing about it for a couple of days, I decided it would probably be a lot of fun to get out of town for a day with my boy and his twin sister, Mallory. 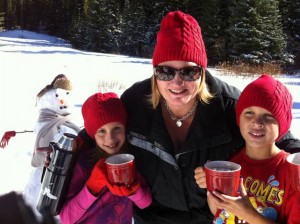 The day of the shoot, things unfolded just fine. My husband got the little twins to school, while the big twins and I waited for Dawn to arrive. After lots of hellos and hugs and introductions, we packed up in her SUV and headed for the high country! After a quick pizza stop, we arrived at the location for the shoot, and the kids marveled at the gorgeous expanse of mountains, trees, and snow. As the crew readied the scene, the kids ditched their coats and ran around in t-shirts and jeans, drinking in the sunshine. That’s Colorado weather for ya!

The man behind the camera was Brian Crawford, Dawn’s husband and business partner. He quickly decided to take advantage of the kids being cute and started filming them almost immediately. Mallory and Pablo were delightful. I was so glad I decided to bring Mallory along. As Pablo’s twin sister, she is probably closer to him than anyone, and he often will turn to her for guidance and comfort. They had so much fun together, building a snowman, making snow angels, and drinking hot chocolate buried in marshmallows.

Before we knew it, the day was over. Brian and Dawn decided they had enough footage of my children being adorable, and we packed it up and headed back down the mountain. None of my worries came true; in fact, the day could not have gone any better. I’m so thankful that I got over my anxiety and stepped up to help with this campaign.

The video is adorable, and I wish I would have filmed my boy watching it for the first time. He smiled so wide when he saw himself onscreen, and remarked, “I want to do that again!” Mallory went back to school the next day and informed her entire class that she was going to appear in a movie. I’m sure she’ll be signing autographs when we play it for her classroom. Huge thanks to Autism Science Foundation for asking us to do this – it was a blast! View the video below or if you’re having technical difficulties, click this link to watch:

Please consider making a donation to the Autism Science Foundation. The money they raise goes directly toward research so that kids like my son can lead happy, fulfilling lives. So many of the typical, everyday things we take for granted with our children are a huge struggle for kids with autism. You can help to turn that around for my son and kids like him!