On the lawn in front of stately Denver East High School, Isaiah Hendrix reached out and, with the back of his hand, lightly tapped his brother, Kadeem. “He means a lot to me,” Isaiah said. “I love him.”

A few minutes later, Kadeem said of Isaiah, “He means everything to me.”

Isaiah is a senior tailback, Kadeem a junior quarterback for the East Angels. They are good players, good enough they probably will be able to play college football somewhere.

That’s not what this story is about.

This is about the love among two brothers and Carol Wilcox, the Denver schoolteacher who after spotting them as victims of abuse from their birth mother and then in the foster-care system, took them in, and eventually adopted them.

Isaiah and Kadeem call her “Mom” in all conversations with others, but “Miss Wilcox” to her face.

Kadeem said: “When she asked to adopt us, it made me feel like I was loved. All I know is that it will take a lifetime to pay her back.”

Recently, the diminutive Wilcox, 52, was working at the East High Football Booster Club table at halftime of the Angels’ game against Broomfield at All-City Stadium, wearing a red practice-type jersey with “Hendrix” on the back.

Around her and in the stands, other adults wore personalized jerseys linking them to sons and grandsons playing in front of them. Her jersey advertised her association with two young players who look nothing like her, and, at least in the case of 6-foot-5 Kadeem, tower over her.

But she’s their mom. 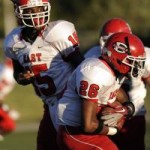 “What have they meant in my life?” she asked, repeating the question. “What do anyone’s kids mean to them?”

She paused. Then the woman who was reluctant to be interviewed because she believed the spotlight should be on the Hendrix brothers — on her sons — spoke emotionally.

“They’re a blessing for me. People say the boys are lucky to have me, but I’m lucky to have them. They’re kind, they’re respectful and they are fiercely loyal to each other. They’re best friends and they will always have each other.”

The boys have been through a lot together.

“There were issues going on with my biological mom,” Isaiah said. “When we were young, like babies, something happened and the police came and took us away and brought us to foster care.”

They were placed in a foster home, but by the time they were attending the new Green Valley Elementary, there were troubling signs. Carol Wilcox, the vice principal, was concerned and couldn’t get much out of the brothers.

“It was bad,” Isaiah recalled. “I don’t really like to talk about it. It was abusive, physically and also emotional.”

Kadeem finally opened up to Wilcox.

“I’d always get in trouble at school,” Kadeem said. “One day I had a huge bump on my head from my foster mom abusing me. (Wilcox) asked me what went on, and I told her. That’s when we were taken out of that abusive home and put into the Crisis Center.”

After that interim step and the clearing of some logistical hurdles, the brothers moved into Wilcox’s home and she became their foster parent.

“She just asked me and my brother if we wanted to live with her,” Kadeem recalled. “For us, there was no question.”

Said Isaiah: “She loved us and she wanted to help us. So she just did it.”

Wilcox didn’t say much about it at the time, because of the considerable Social Services administrative and paperwork details, but she was moving toward adoption from the day the two brothers moved in with her.

Three years later, it became official. Wilcox, a graduate of Mitchell High in Colorado Springs and the University of Colorado at Boulder who earned her doctorate in reading and writing curriculum design from the University of New Hampshire, legally had two sons. Since her stint at Green Valley, she also has been at Archuleta, Columbine and Stedman grade schools in Denver, and went back to teaching fourth grade at Oakland Elementary in Montbello this year.

“Being an assistant principal was a little too much as a single mom,” she said. “I love teaching.”

Room for sister too

The brothers also have been under the wing of Narcy Jackson, a youth sports coach and community activist who runs Athletics and Beyond, a program designed to shepherd and challenge young men to stay in school and use sports as motivation, and Red Shield Community Center coach Lance Taylor.

The brothers came to East, determined to move on to college, and under A&B guidance, both have attended offseason football camps at Colorado, Colorado State, plus a national underclassmen combine in Los Angeles.

After East’s 58-35 loss to Lakewood on Thursday at Trailblazer Stadium in Lakewood, the Angels are 4-3 overall, 3-1 in the Class 5A Denver Prep League. 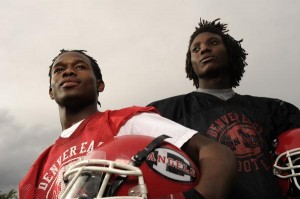 Kadeem is 58-for-99 passing, for 866 yards and 11 touchdowns. He suffered an ankle injury in the final seconds of the game Thursday, though, and might be out of the lineup for a game or two — or maybe beyond.

Isaiah had an 80-yard touchdown run and 140 yards rushing against Lakewood. With 554 yards on 83 carries, Isaiah is the Angels’ second-leading rusher, behind Shahid Hoover.

Recently, the brothers’ older sister, Rashida, 20 and a student at Metro State, moved into Wilcox’s Park Hill home too. “So it’s me, Kadeem, my sister, two dogs . . . and my mom,” Isaiah said.

Of course, if Isaiah had been talking in Carol’s presence, he would have finished that list with “Miss Wilcox.”

You know they don’t mean it.