Editor’s note: Almost two years ago, Denver was caught up in a scandal when it was revealed Shawn Merriman was involved in a $20 million Ponzi scheme. There were many victims but no one was more blindsided by his betrayal than his own wife and four children. In our three-part series, Shawn’s now-ex-wife Andrea shares how she learned the horrible truth, the day the Feds came to confiscate everything and where she is today.

I still can’t imagine what life in prison is like (Shawn Merriman was sentenced to 12 1/2 years). I imagine there is a lot of down time, time to think, and sometimes my children get letters filled with the musings of a lonely man with time on his hands for thinking deep thoughts. Most recently, it was regarding one of my ex-husband’s favorite memories. At the time, he was very angry with me because of it, so it was gratifying he has finally seen it for what it was. Here’s what happened.

Years ago my family went to Disneyworld. We paid an extra fee to stay in the park until midnight. However, that night it rained. A lot. For some reason, not many people wanted a wet adventure in the twilight hours. The park started emptying.

My former husband was one of those who wanted to give up on the magic. But I didn’t. I told him we could make memories in the rain as easily as fair weather, so I thought we should stay. So we stayed, although my children’s dad was mad at me and my unwillingness to leave the park for a good part of the evening.

What a night! Water poured from the sky, and ran, like small rivers, down the streets of the Magic Kingdom. It was so wet, paint from the rides dyed my clothing and our shoes squished when we walked. Our hair was plastered to our heads making us look more like drowned rats than the Colorado residents we were. We even got stuck on one ride when it broke down, on our backs facing the ceiling, with rain and water pouring on us…for almost 40 minutes!

We had so many wild and unexpected adventures that, after an hour or two, even my ex-husband had to let go of his animosity and laugh at all of the crazy fun we were having. We rode ride after ride as often as we wanted without ever having to leave our seats, we laughed, we suffered (a little) and made the best memories–my children still talk about that night.

As we left when the park closed, we noticed even the Disney characters had given up and were nowhere to be seen. We were told there were less than 70 people in the entire Magic Kingdom that night! But we proved you can have fun, a magical adventure, in the dark, in the cold, despite suffering and even when you’re (mostly) alone.

It was a lesson that would serve our family well.

Because eventually, I ended up single after 20 years of a happy marriage. Rebuilding my life after such devastation and total loss–finding a job, moving to a new city alone, raising my children by myself, dealing with daycare and bills and auto repairs and toilets and garbage disposals, re-entering the singles scene and everything else I’ve gone through–is something akin to being trapped on my back, with a flood of water conspiring against me, for a seemingly endless amount of time. It, too, has been an adventure.

But that’s ok, because the unexpected life is replete with adventure. You just have to see the adventures for what they are, opportunities, and make the most of them.

And if we endure, if we’re the last man standing in the Magic Kingdom at midnight, I guarantee we’ll see our unexpected life for what it is: an adventure. We’ll see the good that came of it.

Like every Disney story, there WILL be a happily ever after. You just have to get through the rain, sometimes, to see it.

“Life is either a daring adventure or nothing.” (Helen Keller) 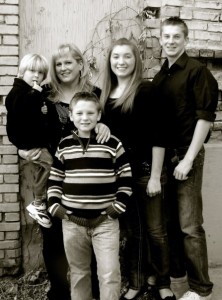 Almost two years after her unexpected life began, Andrea is living in Utah, works in public relations and is engaged to a wonderful man. Be sure to tune into her adventures and reflections at her blog, The Unexpected Life.