DIY technically means Do It Yourself, but we have other definitions:

Yes, our version of DIY pretty much always ends in Yelling.

(This photo was taken in the midst of one of our bathroom remodeling projects.)

The quality and clarity of swear words included in the Yelling phase have changed over the years with the addition of our child to the mix. In years past, we’d joke that we could totally have a home improvement show on television, but it would have to be on HBO.

Now we use this as an exercise for teaching our daughter that it’s perfectly acceptable to disagree with someone you love, and that forms of communication happen in varying decibel levels.

We’ve been working on our house for over nine years. Management put her foot down and sanctioned a mandatory rest-period last year. I didn’t approve any home improvement projects that came across my desk. My husband was sneaky and got some outside work projects approved anyway. 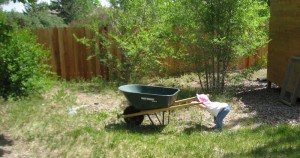 What was I going to say? No, you can’t dig rocks? Digging rocks only involves the cost of labor, because he uses materials we already have, and the end results are nice. On a related note, neither one of us can remember exactly why “big yard” was on our list of “wants” when we were looking at houses.

(Yes, this photo is proof that we blatantly disregard Child Labor Laws.)

Now, I’ve opened up the application process again, and I’ve approved our next project: The Kitchen. We’ve saved this room for last. Ironically, it was also first. It was the first room we tackled when we were brand new home owners of a not-so-brand-new house. Once we’re done with the kitchen, we’ll be done working on the house, and it will be time to move.

One of the things we’ve always said is that the changes we’ve made will be enjoyed by us, and not just for someone else. Anything other than that, and we’d be the slowest flippers known to man.

Back in 2001, the minute we stepped into our house, we knew it was ours. We’d been looking for a house to “touch-up” and “re-do.” We’d been apartment dwellers for years and were tired of watching show after show on HGTV without the opportunity to get our hands dirty.

The house we saw had good bones. It was nice, and we could live in relative comfort while tearing the place apart. Rather than the original shag carpet, it had brand new carpet to attract buyers, and the dark wood of the trim, railings and fireplace surround had been painted white in the living room.

The bathrooms, however, came straight out of the 70s, and they’d brought every light fixture with them. In fact, every room needed something, but it was all cosmetic. We weren’t afraid of the cosmetic. We could handle it. We wanted to! 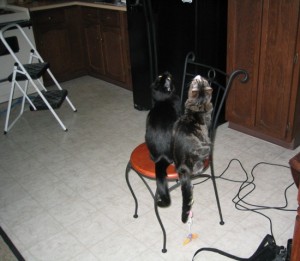 The pink country heart wall-paper of the kitchen was the first project on our hit list. I removed it myself. I then textured a focal-point wall, and together we painted the kitchen. Some years later, we removed the hideous light-fixture and installed recessed lighting and under-cabinet lighting, too.  (This photo is from the Recessed Lighting Project.  The kitties cannot figure out why Daddy is in the ceiling.) We also replaced the ceiling fan with one that was actually attached to something in the attic. Oh, the concept! Yes, imagine our surprise when we removed the fan to see that it was just BALANCED on the ceiling joists.

Every single project we’ve tackled in this house has had a surprise lurking for us. Some of the surprises were not happy finds: Rather than replace the grout around a single tile in the Main Bathroom (so that we can focus on the Master Bath Project), we have to gut the whole thing down to the studs and even replace some of those, thus putting our original project on hold? Fantastic!

Some of the surprises were happy finds: There’s an entire flagstone patio under the portion of the 3-tiered deck that we needed to replace anyway? Unbelievable!

There are some things that are just a given: Nothing in this house is square. When you see “custom built” in the description of a house, there’s a reason. Our house was built in 1977. Things have shifted. I can’t blame it. I mean, I’m only three years older than our house, and things on me have shifted as well.

We’ve learned so many things. Things that used to scare us or give us pause are like second nature now. Painting, texturing, drywalling, network wiring, tiling, landscaping, deck repair, flagstone patio building, all pieces of cake. I can (and have) replaced faucets by myself. I’m confident in the replacement of toilets. Installing a heated tile floor? Not a problem.

I’ve also learned that I will never move a cast-iron tub again. Ever. You can’t pay me enough. My husband has learned to listen to his wife’s nagging and always, always, always wear protective eye gear, even when the task of “stirring deck stain” seems so innocuous.

I’ve learned that some things may seem tedious, but are so much easier than hiring a divorce attorney, splitting up your belongings and selling a house with an unfinished home improvement project.

But, back to The Kitchen Project. I have no idea where anything is in my kitchen at this very moment, because it’s all in our dining room. (Except my plastic containers and lids.  Those are in the laundry room. Don’t ask.) At any given moment, there is probably a thin layer of dust covering almost every major surface. As much as the perfectionist in my head screams about this, the casual part of my psyche has accepted it. Both are used to this. We’ve done this many times before. The end result will be worth it. It always is.

So, what are we doing this time? We’re refinishing and painting the cabinets, installing new hardware, and we’re putting in a hardwood flooring that may or may not spill out from the kitchen and into other areas of the house, depending on the budget. I’ve actually convinced my husband that it will be acceptable to pay someone else to install the floors. As much as I’d love to add another item to our Home Improvement Résumé, and as much fun as cutting floor boards sounds, I’m happy to let someone else be responsible for the outcome.  This time. We’re doing all the demo and floor prep, so there will be plenty of opportunity to get the DIY feel for this project.

And we’ll try to keep the Yelling to a minimum.

What does DIY mean to YOU?