We may live near the mountains but on Friday nights, the ocean is where it is at in Denver.

Denver Aquarium has introduced Friday Family Nights. From 5 p.m. to 9:30 p.m. kids 10 and under eat for just $1.99 and the exhibition cost is just $5 for children (both prices are with a paying adult). Also included in this fun night is free face painting for the kids, exhibit scavenger hunts, animal shows and interaction, raffles for prizes and reduced adult exhibit tickets with an Aquarium Restaurant receipt.

Last week, my family checked out Friday Family Nights. We hadn’t been to the Denver Aquarium in a couple of years and expectations were high–we recently returned from a visit to the nationally-renowned aquarium in Virginia Beach.

Friday Family Nights at the Denver Aquarium did not disappoint. 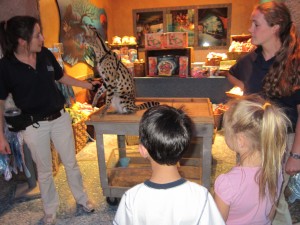 When we walked in the doors of the lobby, there was a live animal demonstration of an Africal Serval, an exotic cat that is able to jump about five times its height in order to catch birds. The aquarium presents many other animals, birds and reptiles on Friday nights.

We dined with black tip reef sharks, groupers and schooling jacks adjacent to the Aquarium Restaurant’s 150,000-gallon tank. My husband and I indulged in the Mariner’s Mixed Grill: Top Sirloin, Lobster Tail and Grilled Shrimp. My husband and I did, that is. The kids had pizza and cheeseburgers off the extensive kid menu.

Eating fish while marveling at them hit a bit too close to home. 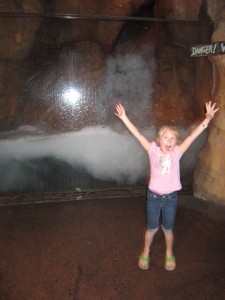 We spent the rest of the evening touring the various exhibits that covered everywhere from North America to the desert to the sea. We fed the stingrays, climbed the coconut tree and squealed during the 5-minute-long 4-D Sponge Bob movie that had us jostling in our seats. One of our favorite moments was standing in the “desert” and experiencing the flash-flood simulation.

Well, at least some of us did. As soon as that water started gushing down, our cautious 4-year-old son darted like a bat outta hell.

Or rather, like a kid facing early death in a flash flood.

As we wound around “ooing” and “ahhhing” at each exhibit, we were mesmerized when we arrived at the Mystic Mermaid tank. This program was launched during the summer and runs Friday-Sunday during the fall (check their Web site for times). This is a family-friendly, interactive show that is choreographed to under-the-sea themed music with real-life mermaids. Or at least tail-touting women wearing who look very convincingly like them. 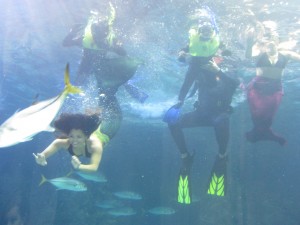 I’m not sure where Ariel did 6-year-old Hadley wrong but she has had it in for mermaids for a while. But when we walked into that room, she stopped in her tracks. Enigmatic music played and she gawked at these mystic mermaids’ hair forming halos in the water as they wove their spell on the 500-lbs grouper, sting rays, eels and sea turtles.

Everyone needs a touch of magic now and then.