The Tragic Beginning of a Blessing in Disguise

He shivered so intensely that it shook the room.

“You are freaking out the baby,” I told my husband. It was probably just a fever. A bad cold with a fever. He will be fine.

But he was not fine. Four days later he was admitted into the Intensive Care Unit where he became paralyzed from the eyeballs, down. With a ventilator keeping him alive and procedures being administered that I could not comprehend, much less pronounce, he laid there, motionless. It had only been a few days since had cleared nearly three feet of snow left on our driveway after the series of snowstorms in February, 2007. Now he was hovering between life and death.

I cried. And wondered how my two-year-old son and I would get through this.

Gino was a police officer. No, he wasn’t just a police officer. He was one of those cops that people liked even though he was a cop. Citizens thanked him when receiving tickets. They called the police department with compliments about the way he handled community confrontations. Earning five chief’s awards in his career, “Officer Gino” gained notoriety as a School Resource Officer with his unique ability to develop rapport with his middle-school-aged students, their parents, the school staff, and other SRO’s across the country. He didn’t stop at making the SWAT team, he worked until he became their sniper. He has protected the country’s top political leaders, and put himself directly in the line of fire to protect the public. 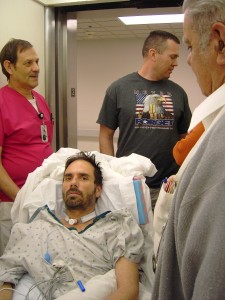 But none of that mattered. After spending his career fighting to protect others, he was now fighting his own body.

“We are waiting on a spinal tap to confirm, but we hope it is Guillain-Barre Syndrome,” I emailed his bosses, best friends and closest family members. Of the alternatives, ALS-Lou Gehrig’s Disease or Multiple Sclerosis, GBS offered the best long-term outlook. However, at this point, we could only hope that we would make it to long-term.

Like a deadly hurricane, the disease stripped Gino’s body of every sign of life. With no nerve messages reaching his face, he couldn’t smile. His eyes were vacant.

The situation was grim.

Friends who visited broke into tears, prompting me to force them out of the Neuro-Surgical ICU so Gino wouldn’t see their fear. Gino’s father said his final goodbyes. Gino hadn’t seen his own son for a week since the illness began.

The hurricane moved out to sea and Gino was left to heal. Though he couldn’t move any part of his body, his sensation remained. His consciousness also remained. He was alert. He itched. He got cold. He was uncomfortable. He had fiery nerve pain. He hated the show on television. He was scared. He had questions. But he couldn’t communicate a single thing.

After three weeks in ICU, he finally stabilized enough to be released from the hospital, still paralyzed from the neck down and still unable to speak. Touring several Long Term Acute Care facilities in the area, Gino’s sister and I were exhausted and discouraged, witnessing firsthand the depressing future that was ahead for her once-vibrant brother.

“There has to be a better option,” I argued with the hospital’s case manger. “He’s forty. He doesn’t belong in a nursing home.” The hospital had labeled his case as “complex,” which meant that an LTAC was Gino’s only option.

“If you want to get to Craig Hospital, you have the weekend to wean yourself off of the ventilator,” I relayed a long-shot option to Gino. I saw determination in his eyes. Come Monday morning, Gino was breathing room air and we were on our way to Craig Hospital, which miraculously had an available room and accepted Gino even though he did not fit their typical patient profile. There for three months, Gino was shown how to live with his condition. I was taught how to care for him after his release. 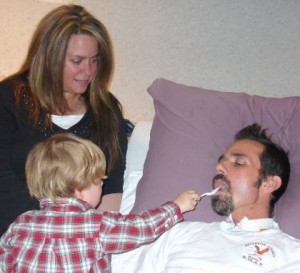 When he came home in June of 2007, a team of friends, led my my mom, had transformed our living room into a hospital room. We set up a makeshift shower in the back yard and turned our garage into Gino’s commode. I learned to use a lift. Friends built a ramp so Gino could get in and out of the house. We were advised to make more extensive home modifications to ease his transition home, like a device to get him up and down stairs. Gino refused. He didn’t want it easy. “I have until October, when it gets too cold to shower outside, to figure out how to navigate the stairs.”

One morning in July when I walked down the stairs to say good morning, his only response was “call my sister.” The day before, we had purchased too many groceries to hang neatly from his wheelchair. So the grocery store manager allowed us to bring a cart home. Gino stared at the cart all night. By morning, he had devised a plan, which involved me holding him and Marianne holding the cart, to take his first steps.

His plan worked. His physical therapist was on-board the following Monday. By August Gino could walk around the island in our kitchen. It took 45 minutes, but he did it. September brought a setback when he flipped his wheelchair and suffered two fractures to his skull, followed by a stubborn case of pneumonia.

But that didn’t stop him. It wasn’t long before he traded his wheelchair in for a walker and walked two-tenths of a mile … in 75 minutes. By October, with my help, he was able to navigate the stairs and use the bathroom inside. For the first time in eight months, he slept in his own bed.

The graduation from to walker to canes occurred in February, a year after onset, and he threw his canes to the curb in March. It took just over a year, but Gino walked again.

Gino recovered enough to become a police officer again, if only part time, in January of 2010. In July he was back to full-time work in law enforcement as an evidence technician. He continues to workout and aims to eventually be back on the street, perhaps in criminal investigations.

Three years and seven months after he contracted Guillain-Barre Syndrome, my back pain is slowly releasing. My house is coming back together. I’m beginning to enjoy going places without worrying about finding a family bathroom or dead-lifting a fallen Gino from the floor. For now, life appears to be normal, if I have any memory of what that means.

When tragedy hits, I always hear people say “one day you will look back and discover that it is a blessing in disguise.” 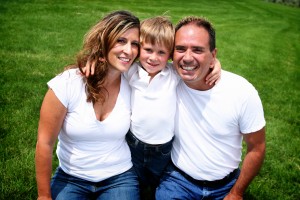 Guest blogger Tami DePalma writes to show mothers and others that parenthood and wellness can go hand-in-hand. She dismisses the idea that “nobody’s perfect,” believing instead that everybody is perfect. Having taught athletics to more than 1,000 children — 18 months to 18 years — this Body-for-LIFE Champion shows kids and parents alike how to live healthy, active lives, both physically and spiritually. She writes at Mommy Means Well and reviews at All Thumbs Reviews.