Kicking Off Another Attempt at Soccer

On Saturday, community soccer kicked off and for the first time, both my kids played.

My husband Jamie and I enrolled 6-year-old Hadley a couple of years ago but she went on a two-year sabbatical after a disappointing season of general apathy and lack of killer instinct.

In her defense, her team name was the Butterflies. Not exactly cutthroat.

This time around, things were better.

Well, with the exception of the administration staff who somehow forgot to inform parents we didn’t have a coach until a few days prior.

It could have been the Lord of the Flies, soccer-style.

Oblivious to the pre-season drama, Hadley was excited to play and it showed. Not only did she actually attempt to touch the ball, she even scored.

This is a far cry from doing pull-ups on the goal post two year prior.

Though make no mistake, that was impressive.

Four-year-old Bode was the dark horse. Though he took to skiing, swimming and softball like a pro this past year, he is generally reluctant when attempting new activities. Coach Eric held a half-hour practice before the game and Bode was among the smallest and slowest on Team Dragon.

I held my breath as the game started. There were three players on the field and Bode was on the starting line-up with his best friend Seanie. The first half of the game was like a comedy show gone bad: running, tripping and general confusion.

A few preschoolers figured it out but Bode was not among them. When we took a break at halftime, he complained, “My dragon legs are hurting.”

At least he was getting into the spirit of it all. 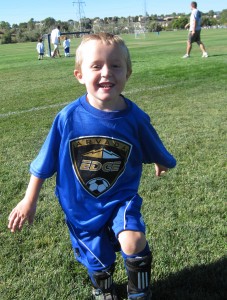 My husband Jamie became his personal trainer. After massaging his hamstrings, he gave him a pep talk and promise of a candy bar if he scored.

Everyone has their own motivational strategies.

Something clicked with Bode that second half. He started dribbling. He didn’t give up. And dare I say there was a glimmer of that oh-so-coveted killer instinct.

He went on to score three goals, the second most on his team.

Not that I was keeping track.

What community sports are your children enrolled in this fall?