Normal is a setting on your dryer: A dad’s cancer, a mom’s new role & the new normal

What is “normal” and why do we always seem to be looking for it? It makes sense that some would seek predictability once they start a family, but is “normalcy” really something we can attain?

“I can’t wait to have a normal life,” is exactly what I was thinking three years ago in St. Louis, when my husband, Danny, a pilot, was interviewed and hired the same day for his dream job at Frontier Airlines in Denver, then asked to start training right away. We had
moved four times in the past five years, and now with a 6-month-old baby, I had the job of selling our house, packing and moving all on my own… in just one month. Every day I felt on the verge of a nervous breakdown, but would keep my eye on the goal: just make it to Denver, and then life will calm down.

You’ll be happy to know I made it without checking into a mental hospital first, though I kept a few numbers on hand, just in case. We were finally on our way to normal, planning our baby’s first birthday party, when one Tuesday night, while giving Reagan a bath, I heard Danny dropping something over and over again in the hallway. I found him slumped up against the wall, his face and body completely slack on one side, reaching down to pick up a pair of pliers and then dropping them again. Though I couldn’t fathom it at the time, he was having a stroke. At 39 years of age.

At the ER, an MRI confirmed a TIA, or mini-stroke, which thankfully, Danny fully recovered from. But, it also showed something else: tumors in his chest, caught at the very edge of the scan. This was not how normal was supposed to go. Good thing I held on to those numbers. 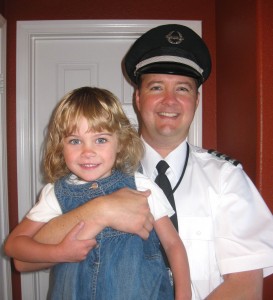 Danny was diagnosed with Non-Hodgkin Lymphoma and began chemotherapy right away. After much poking and prodding by every doctor on staff, it was also determined that the cancer had caused Danny’s stroke, in a very rare sequence of events: a blood clot caused by the Lymphoma had passed through an atrial septal defect (or hole) in his heart, and shot up to his brain when he performed a Valsalva maneuver at high altitude during a flight earlier that day. We now call it, a “stroke of luck,” as Danny’s cancer was
fast-growing and was caught early at Stage 2; the upshot of the stroke sending us to the hospital that night.

The next year was anything but normal. Danny underwent six months of chemotherapy, followed by a month in the hospital for a stem-cell transplant, four weeks of daily radiation and three months sequestered at home under 24/7 watch (by me) while his immune system rebooted itself. It was an entire year of endless nausea, pain and suffering for my husband, and all new family dynamics to negotiate for both of us.

By the end of the year, Danny was recovering well. He felt strong enough to begin helping out again at home, but as a pilot for Frontier and a Flight Engineer for the Air Force Reserves, protocol said Danny couldn’t return to work for at least another year. Five years, in the case of the Air Force, with a high likelihood of forced early retirement. I knew it was time for the rest of my normal to unravel. I needed a job.

Not knowing what motherhood had in store, I had been open to returning to work before Reagan was born. But as soon as that bond took hold upon her birth, I had torn up my resume in my mind. Now, life wanted me to rewrite it.

We were about to try on a little role-reversal, and I wasn’t too thrilled about it. Leaving my post as my daughter’s primary caregiver, and simply the idea of being apart from her, had me heartbroken. I needed an attitude adjustment before I could step into an interview.
And, could Danny really transform into Mr. Mom?

Enter life coach, Gretchen Reid. I was very blessed to have won coaching sessions with Gretchen in a Mom Makeover Contest through Colorado Parent Magazine. Gretchen first helped me to see that just because Danny might not do things exactly the way I did, didn’t mean our daughter’s needs wouldn’t be met. I needed to let go and embrace my new role as did my husband his.

Through coaching, I was able to overcome a complete lack of zeal for returning to work by turning it into a growth opportunity. We created something new I could be passionate about – combining my interests with my existing skill set. I started to feel challenged and
excited about working again.

The best part about my new vocation, is that I could do it from home! Or at least, that was supposed to be the plus. I wish I could tell you that we had finally hit our stride, but, the reality is, without posted office hours, a door, and several miles between us, to my family, I was still Mom whenever they needed me to be.

After almost an entire year of dueling roles and responsibilities during working hours, I admitted defeat and registered Reagan for a full-time, in-home daycare/pre-school on her 3rd birthday. By this time, Danny was studying hard for his eventual return to Frontier and recovering from yet another major medical procedure – disc replacement in his back. His partial and sometimes complete immobility before and after surgery is what left him unable to do many of the tasks involved with caring for a busy toddler or maintaining a home.
Even though having our child in daycare was SO FAR from what either of us wanted our normal to be, it became a blessing for us all.

Last month was filled with milestones for us when Danny finally returned to his co-pilot seat at Frontier and to duty with the Air Force after a long, hard fight to prevent being medically retired. He has not only conquered miles of red tape, but cancer too, as his Oncologist declared him as good as “CURED!!!”

Two-and-a-half years ago on that terrible Tuesday night, I braced myself for the long road ahead, with the goal that one day, life would “return” to this picture of normal I had in my head. My lesson: there is no such place and I should stop looking for it. Instead, the plan is to navigate roadblocks and welcome detours as all just part of the journey.

Today, our normal is somewhere in between where we started and where we’d like to be. Though the cost of cancer has meant returning to being a full-time, stay-at-home mom is no longer an option, I’m now working part-time, and loving what I do. The other 4-5 days a week, I’m just doing my best like any other mom, and cherishing every minute of my normal-to-me life, with my now even more importantly, healthy family.

Are you still seeking normal? What does normal mean to you?