I am going to be honest right up front. I am a staunch Obama supporter. Usually we don’t talk about such things here on Mile High Mamas, but given the fact that the Democratic National Convention has taken over our town this week and the big speech will go down this evening at Invesco, there was nothing else I could write about today, now was there?

It is all certainly historic, if not energizing. (Depending on your point of view, of course.)

But besides the politics, has the last week been surreal or what? It’s been overwhelming. Both in terms of the amazing energy *and* the wild ride anyone living or visiting downtown has witnessed. The amount of people, media, controversy and celebration has been like nothing we Denverites have ever seen. And while I don’t understand the details of every situation (and there is too much to keep track of!), one thing I have heard over and over around town and on the news, the people of Denver are awesome. So nice. Not just the volunteers, but the people of the city. So, Democrat or Republican – we have so much to be proud of.

Has everything gone smoothly?

You’re so vain. You probably think this post is about you.

Lori blogs from a Denver suburb about mindful living at Weebles Wobblog and about her twisty journey to become a mom at Drama 2B Mama, She also dishes about good buys at All Thumbs Reviews. Writing sometimes helps her to recall bits of herself that she once gave away. Her great dream would be for her son and daughter to keep their soul-bits to themselves and never have to do such a recall. Is that even possible?

He was 19, two years older than I. Because I had been a band-weenie in high school (flute, thank you very much), it was quite a social promotion for me to wear his letter jacket at our small college. He — the artist, the poet, the football star, the Paul McCartney look-alike — he was interested in little ol’ freshman me.

“Paul” and I were together less than a year. We began dating in late fall and broke up some time during the summer when we were home in our respective cities and he met a new girl. But in the early part of the summer, I received beautiful poetry written for me, devotions of undying love. Real handwritten letters in my mailbox. It was an endless summer and a painful fall.

Fifteen years later, he looked me up and began emailing me. He was going through a divorce, and I knew that such a thing can prompt a person to take stock of his past. We corresponded for a few months, and our interactions culminated in a phone call where I gently slipped in (in case he had begun wanting to become more then “old friends”) that I was very happy in my marriage. The call ended and he never contacted me again.

Fast forward another decade to now. Soon I will be traveling to his city.

At the end of February, I embarked on a journey to save my father’s life. At the time, I didn’t really know just how much I would have to endure. Perhaps it is best. I brought my then 9-month-old son along, creating a separation from my husband that was the longest we’ve ever tolerated. It was far more difficult than we all had prepared ourselves for.

My father had ignored his health and become bed-ridden. He was in complete denial about the state of his body, and that is why I flew back to Texas. I was the only one who could badger and anger him enough to do something about it. His stubbornness was matched only by his need to keep secrets.

A week and a half trip ended up being over a month long. Within two days of my stay, I had put my father into the hospital. He was diagnosed with severe congestive heart failure, edema, heart disease, and lung disease. He would get better, and then get worse. Every day, I drove to the hospital to stay with him. Every day, I brought my son. I was taking care of my mother (who was having daily seizures and health issues), my son, and my father. It felt like the great big karmic skies had opened up and dumped everything upon me at once.

Throughout the ordeal, my son was incredible.

Parents’ goals for their children: A study

There are certain things that we all want for our kids. Generally speaking, they are the same things we want for ourselves: health and happiness, right? Oh, and eventually enough money in the bank to pay for health and happiness. From there, the individual parent’s list of wants either grows a little or becomes something that rivals The Polar Circle Marathon in regard to length and degree of difficulty.

Number one on my mother’s list of goals was to make sure her children were respectful to their elders. When we were given a directive by my father, we were taught to call him “sir��? when replying. “Yes, sir.��? “No, sir.��? “Ten-four copy that, sir.��? We acknowledged every adult that came into our home and then quietly left them to their business. When visiting other homes, we greeted every adult with a handshake or hug, a “How do you do?��? or a “¿Como esta?��? Number two on her wish list was that THE CHILDREN WASH THEIR DISHES.

My father’s goal was to make sure we knew how to use reference books. This was back in the dark ages before the Internet. So our house was filled with encyclopedias, English dictionaries, Spanish dictionaries, map books, quote books, how to use shorthand books. I remember there was this library contest back when I was probably in the fifth grade wherein dinosaurs were on posters plastered all over the place. “Where is the thesaurus?!��? they asked in big letters. Pfft. Our family had a small family of THESAURUSES… in several languages. His second goal in regard to his children? THAT THEY

Career vs. Stay at Home: How Did You Decide?

I was contacted a couple of months ago by a book publisher. I know. Me.

The email appeared as I was being forced to get jiggy with my daughter and her favorite movie, The 12 Dancing Princess. As I strained to read the email’s contents, Hadley reprimanded me I was not “keeping form��? with my pirouettes. This, from the girl who performed an impromptu solo at her dance recital.

The query came from a leading publisher in the outdoor industry. The company was looking for someone with a travel writing background to write a guidebook on hiking with children in Colorado.

I went through my mental checklist:

Hiking? Love it.
Children? Have them.
Colorado? Live there.

It was the perfect fit! Or was it? After the initial euphoria wore off, I sat down to weigh the pros and cons of accepting an assignment of this magnitude. And after a lot of self-reflection, my answer was

[photopress:bellecarrier.jpg,full,pp_image]If the Olympics are inspiring you to get up and go, Mile High Mamas has the perfect giveaway for you…even with baby in tow!

I first stumbled upon Belle Baby Carriers at a baby expo a few months ago. This Boulder-owned company launched locally just two years ago and since then has grown to serve more than 200 domestic retail outlets and can be purchased in eight different countries.

What makes it so popular? Unlike other baby carriers and baby slings, the Belle Baby Carrier distributes your baby’s weight to your hips instead of your back and shoulders, and it positions your baby in a proper, ergonomic position that supports your baby’s developing spine.

[photopress:Heidi.jpg,full,pp_image]We are pleased to feature Heidi of Outdoor Baby as our Mama Blogger of the Month! She is a mom of one and has gone beyond just enjoying the outdoors to creating a blog and Web site to help others do it, too.

Tell us about your “Outdoor Family!”

My “Outdoor Family��? is comprised of my husband Erik (our fifth anniversary was on August 5th) and our daughter Cora (age two). Erik and I were both working for Outward Bound in Canada when we met and we’ve had lots of outdoor adventures since then. Now that we have Cora we try to find outdoor activities that we can all enjoy together. She loves to point out different flora she can identify (juniper, pine, flowers, sage, and cactus), and look at rocks and insects when we’re ‘amping’ (camping).

What is the inspiration behind Outdoor Baby?

The inspiration for Outdoor Baby comes from my own love of the outdoors and from our experiences learning to camp with Cora. We found that even though we both had lots of outdoor experience, we couldn’t find any resources on the web to support us as we learned how to camp as a family, so we learned mostly through trial and error.

These are the best years of my life. My kids are old enough to take care of their own bathroom duties and young enough to still believe that I know it all.

We’ve had so much fun this summer. We have biked, traveled, and swam. Often when I am soaking up the sun and watching my kids swim I find myself humming the Jim Croce song, “Time in a Bottle.��?

I’m sure when Mr. Croce penned those lines he imagined a wine bottle with a tattered label and a wooden cork. It definitely conjures up a more romantic image than the receptacle I chose to capture the summer of 2008…a Mason jar.

Though I’ve lived in the Pacific and Mountain time zones for the last 12 years, my DNA is purely East Coast. I’m more than willing to be a Good Samaritan, but certainly not at the expense of my own convenience. As you can see from this photo, I’m sitting in LAX, staring at the gate from which my flight to Denver has recently departed. 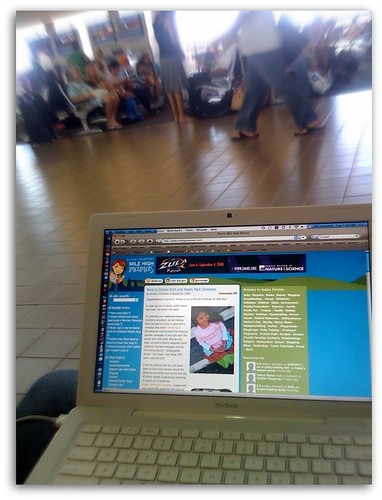 So what went wrong, Mitch? Overslept from a hangover? Nope. Too much LA traffic? Not at all, the cab ride from Santa Monica went like clockwork. Long security line? Ut ah, buzzed right through. So why aren’t you writing this at 40,000 feet, Mitch? Well…let me tell you.

My husband Bryan has always been a conscientious objector. Not so much in the political way, but more in that he just likes to do things differently than everyone else. Everyone says yes? He says no. They turn right, he goes off the path entirely and finds a whole new route. At first, it was unsettling and almost made me walk away from the relationship. But I came to realize that someone who thinks a little differently than the crowd is a force to be reckoned with. And certainly *never* boring.

Enter Declan. At nearly 6, he is absolutely a mix of both of us. Both physically and emotionally.

But he never was more like his father on this day, a few weeks ago, when Bryan picked him up from summer camp.

Declan: “We were all playing Animal Club again today.” [He and his friends had been doing “Animal Club” for about a week, where each kid was a different animal, assigned by their leader, who – as Declan described it – seemed to be very much LARGE AND IN CHARGE.]

Declan: “Not so good. I got kicked out of the club.”